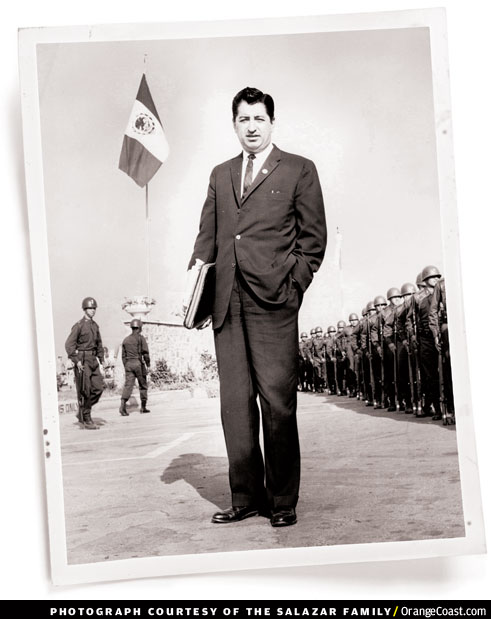 Not yet 10 years old in 1970, the two daughters of Ruben Salazar weren’t aware that their father was one of the country’s most prominent Latino journalists. But they knew he wrote for a newspaper, the Los Angeles Times, and that he worked long hours because they usually ate dinner before he got home.

They remember that he wore business suits, and that he had pale skin and long eyelashes, and that he delighted in taking them, their little brother, and mother to Disneyland and Balboa Island.

The girls sometimes would hear him speaking Spanish on the phone, but otherwise he didn’t have an accent, and theirs was an English-speaking household. (Their mother, Sally—who died in 1993—was Anglo with blond hair and green eyes.)

They lived in a newly built tract house in Santa Ana, when the city was predominantly white—along with the rest of Orange County. Nearby were marshes and a sprinkling of strawberry fields and, less than two miles away, the lima bean fields from which the already impressive South Coast Plaza had begun to sprout.

“We had a swimming pool. There were always kids in it,” recalls Stephanie Salazar Cook, speaking from her home in Honolulu. She has memories of her father sprinkling salt on his apples (“which, to this day, I’ve never seen anybody else do”) and listening to the 5th Dimension’s “The Age of Aquarius” on the family hi-fi. “He played it over and over. That was his favorite. You could hear the needle go [she mimics the crackle of it dropping on vinyl].”

Salazar, a Times columnist and news director of pioneering Spanish-language KMEX-TV, was covering the National Chicano Moratorium Against the Vietnam War, a protest in East Los Angeles on Aug. 29, 1970. The gathering estimated at 30,000 people turned violent when police went into the crowds. As the unrest continued, Salazar and a KMEX colleague ducked into the Silver Dollar Bar on Whittier Boulevard at Indiana Street—many blocks from the event’s epicenter—to use the restroom and have a beer.

A bystander erroneously reported seeing a man with a gun enter the Silver Dollar, and Salazar was sitting at the bar when a tear-gas canister fired by a Los Angeles County sheriff’s deputy hurtled through the closed curtains at the entrance. It passed through the back of Salazar’s skull, killing him instantly. He was 42.

The riot claimed two other lives, resulted in more than 60 injuries, and led to about 200 arrests and property damage in excess of $1 million. But Salazar’s mysterious and troubling death dominated the headlines, making him an enduring symbol of the mayhem. A new PBS documentary, “Ruben Salazar: Man in the Middle,” which airs nationally on April 29, is the most comprehensive look to date at Salazar’s life, times, and legend. Drawing from family archives—including Salazar’s personal journal—and revelations from long-suppressed law enforcement files, the one-hour program provides missing pieces within the context of agitated times.

Salazar’s Chicano-themed columns were groundbreaking for the mainstream Times, and they attracted national attention. “Instead of writing bland descriptions of Mexican-American family life, Salazar regularly turns in hard-hitting weekly columns attacking ‘Anglo’ racism and voicing serious Mexican-American grievances,” wrote Newsweek. The article quoted a newly charged Salazar: “I think what we ought to do is shake up the Establishment so that it will include us.”

Salazar believed he was being watched by law enforcement because of his unapologetic coverage of police tactics in the Mexican-American community. The day he died he told a coworker he thought he was being followed.

There was a much-publicized 16-day inquest, which produced 2,025 pages of testimony from more than 60 witnesses, and 204 exhibits. When it was over, Salazar’s death was deemed an accident. No criminal charges were ever filed.

But the case wouldn’t go away. With the files off-limits to the press and public, conspiracy theories swirled. All the while, Ruben Salazar’s name became synonymous with the struggle of La Raza.

“There were all these groups with political and social agendas. Watts [the riots of 1965] was still on people’s minds. The ’69 Charles Manson murders were in the news. Yeah, it was crazy,” says Phillip Rodriguez, the documentary’s producer and director. Rodriguez, whose work often explores themes of race, believes Salazar’s story resonates with today’s Latinos, that he embodies ambivalences and ambitions of the modern Latino. “No disrespect to Cesar Chavez, but Ruben Salazar is much more representative.”

His ensuing martyrdom led to myriad tributes. The 8.4-acre park where the moratorium took place today is known as Ruben F. Salazar Park. There are namesake community centers and schools. A 2008 stamp from the U.S. Postal Service commemorates his work as a journalist, as do scholarship programs.

Artists and entertainers have embellished Salazar’s folk-hero status. He has a saintlike demeanor in the lithograph “Heroic Voice,” by Mexican artist-
muralist David Alfaro Siqueiros. A corrido by acclaimed guitarist-singer Lalo Guerrero laments his fate. In the theater production “Cesar & Ruben,” written by Ed Begley Jr., Salazar has a fictional encounter, set to song, with labor activist Cesar Chavez. Another play, “The Silver Dollar,” once was restaged at the bar where Salazar was killed.

Noted writers have had their say. Hunter S. Thompson checked into a dumpy hotel just down from the Silver Dollar, where one of his sources (and drinking buddies) was Mexican-American activist and attorney Oscar Zeta Acosta. The resulting 1971 Rolling Stone article, “Strange Rumblings in Aztlan,” is considered a classic.

Born in Mexico and raised in El Paso, Texas, Salazar had worked for the Times as a foreign correspondent in the Dominican Republic and Vietnam, and later became the newspaper’s bureau chief in Mexico City. Then came a reassignment: Los Angeles needed someone to cover the burgeoning Chicano movement.

The paper would later applaud Salazar as “an early and eloquent explorer of the Mexican-American experience [who] wrote from the ground up.” He continued as a Times columnist when he went to work for KMEX, where he intensified his coverage of the Chicano scene shaking up Los Angeles. According to some colleagues, he was beginning to empathize as well as investigate. The documentary explores Salazar’s conflicts—and his parallel professional and personal lives.

“This is where the mythology rubs up against actuality,” Rodriguez says. “He’s a silent generation-assimilated Mexican-American. But … his kind of manner, his kind of Don Draper get-along assimilative strategy, is rubbing up against new ideas.”

Salazar’s older daughter, Lisa Salazar Johnson, says the documentary “corrects a lot of the misconceptions. People think he lived in Boyle Heights, and that he lived a traditional Mexican life. But he lived in a white neighborhood in Santa Ana. He ate steak. He didn’t drink tequila.”

And for the first time, there is some sense of closure regarding the circumstances surrounding his death. Though the Salazar family went on to file a wrongful-death suit against Los Angeles County and accepted a $700,000 settlement, it never felt justice was done. (Today both daughters remain suspicious; for instance, they believe their father was under surveillance.)

Rodriguez, who spent years making the documentary, and co-producer Jennifer Craig-Kobzik partnered with the Mexican American Legal Defense and Educational Fund to get the Sheriff’s Department to open the case files. “Ruben’s story was mired in so much mystery and conspiracy thinking, it could never before be told with any kind of historicity,” Rodriguez says.

When the files were made available in 2011, Rodriguez and the Salazars found details they hadn’t known and photos they’d never seen—including disturbing crime-scene images—but no concrete evidence of a conspiracy, large or small.

Among those who went on camera to tell the story: former Deputy Tom Wilson, who fired the tear-gas canister. The documentary concludes that Salazar, who is buried in Corona del Mar’s Pacific View Memorial Park, died because of a tragic mistake. “Conspiracy theories are very alluring. But finally, ultimately, you’re looking for resolution,” says Rodriguez.

The program speculates about what might have happened to Salazar, had he lived. “Toward the end of his life, some things were changing,” says daughter Lisa. “In a TV interview he gave, he said he felt that he had to advocate [for] a community because no one else was.”

Still, she adds, it’s long felt strange to hear her father constantly referred to as an activist, or a martyr. “Because what he was, was a reporter. He was on the beat.”

See It!
“Ruben Salazar: Man in the Middle” airs at 9 p.m. April 29 on PBS SoCal. To learn more about Salazar, click here.

This article originally appeared in the April 2014 issue.