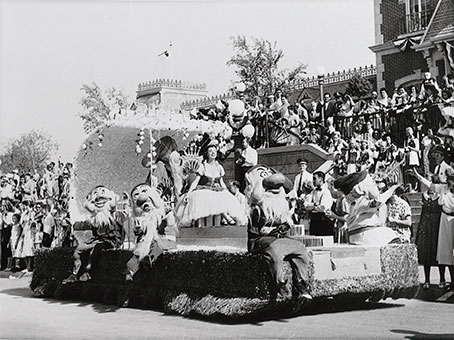 JoAnn Dean Killingsworth is a favorite at Capriana, a retirement community in Brea. She walks through the art room where her paintings are currently on exhibit, and then turns down the hall toward her apartment. Staff members and fellow residents who pass all have a kind word or friendly greeting for the 90-year-old. As she nears her door, two housekeepers emerge.

“Hey, we need more candy, JoAnn!” one calls out.

Just in case, Killingsworth checks the bowl she leaves on a stool outside her door. Sure enough, it’s full of hard candy for “anyone who needs a little pick-me-up.”

She enters her apartment, brightly decorated in white and lime green—“Wicked” green, she calls it, after the musical. On a side table is a sheet of paper with a list of films being shown this week at Capriana. Most are from the last decade, but this weekend the 1941 Hitchcock classic “Suspicion” will be screened.

“I’ll be seeing that one,” says Killingsworth. “I like the old movies.”

No wonder. She’s been in dozens of them. Maybe even a hundred, she guesses. “It’s hard to keep track of everything I did. I wish I’d written it all down.”

She glances at the photographs hanging in her entryway. One shows her as a doe-eyed young woman posing with Buddy Ebsen, another in a cowgirl costume with Roy Rogers. Movie stills where she’s dancing with “Oklahoma!” star Gene Nelson. And on her vanity, a little blue-and-white jewelry box with a cameo of Snow White.

The Deans moved from Minneapolis to Los Angeles during the height of the Great Depression. Killingsworth’s widowed mother, Marion, ran a cafe in their apartment complex near Beverly Boulevard and Normandie Avenue to cover their $45-a-month rent. She served a full meal—soup, salad, entree, vegetable, baked potato, bread, coffee, and dessert—for 35 cents. At 12, Killingsworth worked there as a waitress while her older brother washed dishes. At 15, she decided to go into show business, and begged her mother to let her audition for a local ice-skating show. She got the part.

The following year, she was hired for a touring show. She finished her schooling by mail while skating alongside Gene Nelson in “Hollywood Ice Revue,” which featured Norwegian star Sonja Henie. She then joined Nelson again for a two-year engagement at New York’s Center Theatre for “It Happens on Ice.”

“We’d go listen to Glenn Miller at the Hotel Pennsylvania,” Killingsworth recalls. “Glenn would come sit at our table and ask me about Sonja Henie. He was going to be in a picture with her and wanted to know what she was like. She had a reputation of being very headstrong.”

She returned to L.A. and appeared with British Olympic figure skater Belita in 1943’s “Silver Skates,” the first of many films in which Killingsworth danced. For the next decade and a half, she appeared in Rodgers and Hammerstein’s “State Fair” (’45), Doris Day and Nelson’s “Lullaby of Broadway” (’51), Rosemary Clooney’s “Red Garters” (’54), and Judy Garland’s “A Star Is Born” (’54) where she stood in for the star, performing all her songs and dances at the technical rehearsals.

Killingsworth loved to dance. She recalls a particular Latin number in a project with Xavier Cugat and Carmen Miranda. “With the lights, and costumes, and drums and everything—it was just the most fun! And when they said ‘That’s a wrap,’ I almost wanted to sit down and cry, because I knew that was the last time I’d ever do that dance.”

Toward the end of her career, Killingsworth also worked in television, as a Redette dancer on “The Red Skelton Hour” for three years. “I got lucky because when TV came out, the screens were so small compared to motion pictures that somehow they thought it made sense to have small girls in the shows. I was just 5-foot-3.”

In 1955, when Killingsworth was 31 years old, she got a call from Gene Nelson’s wife, Miriam, a choreographer who was putting together dancers for an ABC special about the opening of a new theme park called Disneyland.

“I thought JoAnn looked like Disney’s Snow White, with her dark bangs,” recalls Nelson, now 91. “She was very enthusiastic, bubbly, and always in good spirits. I knew she’d do a good job.”

Killingsworth had never heard of ABC, a then-new TV network, nor had she heard of Disneyland, or Anaheim for that matter. But she agreed.

“There were four of us—me, Cinderella, Alice in Wonderland, and a girl playing Peter Pan,” says Killingsworth. “We rehearsed for a month, and in the last three days we worked furiously. We danced over the gardeners planting flowers under our feet.”

They even got drafted into riding the merry-go-round for half a day so workers could balance it. Walt Disney flew in almost daily by helicopter. One day, he said he needed to look at Snow White through the camera to make sure Killingsworth was just right. “I was worried for a minute, because Snow White was his favorite and he was very particular. But he gave me the OK.”

The program was set for Disneyland’s invitation-only opening day, the day before the general public’s. Thousands of special guests, families of the employees, and celebrities were invited—and many who showed up weren’t invited. Killingsworth was the only princess to ride on a big float because they wanted to include the dwarfs on it. She ran from ride to ride with the children between dance numbers.

And that was it. Disneyland’s first Snow White was Snow White for only a day.

That jewelry box on Killingsworth’s vanity was given to her in 1987, on the 50th anniversary of the animated film “Snow White and the Seven Dwarfs.” To celebrate the occasion, Disneyland organized a reunion, inviting to the park all of the women who had portrayed Snow White since 1955. About 70 out of the hundred or so showed up. Disneyland had a hard time finding Killingsworth because she was never employed by the park—she’d worked for ABC. Luckily, a friend of hers got wind of the search and told park officials they could find her and husband Jim Killingsworth in Newport Beach.

“We always used to run into John Wayne,” says Killingsworth. “I’d worked with him before, but I never brought it up. I didn’t want to be one of those people—‘Remember me?’ I’m sure he didn’t.”

Too far from Hollywood to continue in show business, she joined her husband to start a weekly magazine called the Newporter, and later, a monthly called Orange County Illustrated. “Jim was a straight-laced reporter, and I had been starting to paint. So he took care of writing and editing, while I managed the office and chose local artwork for the covers.”

A few years after the magazine closed, she found out about Disneyland’s Snow White event.

“At the reunion, I went around with Mickey Mouse, and I saw a sweet little girl approaching. I was holding Mickey’s hand and the girl started getting very emotional. And I felt emotional, too. I thought, ‘I’m with the biggest star in the world.’ ”

After retiring from the magazine business, Killingsworth spent a few years as a saleswoman at Neiman Marcus, learning to open up by talking to strangers all day.
Her husband died in 1993, and Killingsworth sold their Balboa Island cottage of 40 years.

“I love living here,” she says, enjoying a raspberry sorbet in Capriana’s communal dining room. “It’s like a cruise ship. I don’t want to harp on my age, but when you’re older sometimes it’s nice to be taken care of.”

She spends her days writing, taking arts-and-crafts classes, listening to swing music on the radio, and visiting with her brother and sister-in-law, Donovan and Doris Dean, who also live at the retirement community. While she never had children, stepson Bill visits once a week.

She’s proud to have her paintings showcased in the art room. She doesn’t create many—only when the mood strikes—and rarely sells them, instead giving them to friends and family. Most are done from photographs she took while traveling the world in her later years: France, Spain, Italy, and one from an African safari.

One place she hasn’t been in a long time? Disneyland, though Killingsworth says she did return a few times after the ’87 reunion. “They let me in for free. I just called them up and said, ‘Hello, I was the first Snow White.’ ”

Photograph by Melissa Valladares
This article originally appeared in the July 2014 issue.