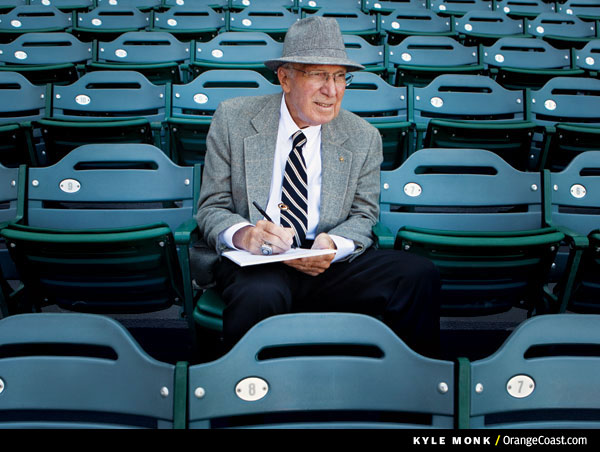 Chances are, when Don Pries steps before the spectators at Camden Yards this month to accept his induction into the Baltimore Orioles Hall of Fame, he’ll receive a smattering of polite applause, but nothing like what will be afforded fellow inductee and 2011 MLB Hall of Famer Roberto Alomar. And that’s just fine with him.

Like so many other great men in professional baseball’s rich and glorious history, Pries, who turns 86 this month, is and always has been a behind-the-scenes guy. The Irvine resident worked for the Orioles from 1968 through ’74 as an area
scout, as director of player personnel from ’70 through ’72, and then as assistant to the general manager until he left the team in ’74.

While there, Pries oversaw the Orioles farm system and worked with general managers Harry Dalton and, later, Frank Cashen during the club’s most successful run. The O’s made the playoffs five times, won three American League pennants and a 1970 World Series ring, and generally were regarded as one of the era’s top franchises.

“This guy had talent,” says former California Angel Doug DeCinces, who came up in the Baltimore system and also is a member of the Orioles’ Hall of Fame. “He loves the game and knows it inside and out. He set the whole Orioles system in place, and even authored a manual that described ‘the Oriole Way’ of playing ball” that was followed, to the letter, throughout the entire farm system.

“We were considered one of the best systems in baseball, but we didn’t always have the best talent. We were simply the best team. And Don was a big part of that.”

Pries’ life these days is a long way from the pomp and pageantry of “The Show.” Like most men his age, Pries’ movements are slow and sometimes labored. He doesn’t get around like he used to, and he’ll be the first to tell you. Despite that, he makes almost-daily visits to his wife of 57 years, Patricia, who suffers from Alzheimer’s and resides at a health care facility in Costa Mesa.

His condominium is immaculately kept and, other than a scattered collection of plaques and mementos he keeps in a corner near the small TV he uses to watch baseball games, it gives no real indication of the man’s storied past. His patio provides an expansive view of the golf course where he plays nine holes every Monday. The focal point of the room is a collection of miniature tall ships that adorn his dining table and surrounding cabinets. He doesn’t sail, he says, but they were gifts from his four sons and 11 grandchildren. The only sounds you hear are the muffled voices of passing golfers, or the chimes from a ticking clock on the mantel.

When he leaves to visit Sharon, he slowly opens his front door, walks through a courtyard and wrought-iron gate, then heads toward a Jeep he keeps under a carport. Pries explains how he cared for Patricia here at home for 12 years until it simply overwhelmed him. She has been in the facility for the past two years, he says, his voice cracking, and is not doing well.

He’s now a man mostly alone with his thoughts and memories. “Look at this,” he says just before leaving, holding up a small art reproduction he keeps behind his computer keyboard showing the faces of some of the Orioles biggest stars from that golden era. “Here they are, my boys.”

There’s little doubt that the Hall of Fame induction holds a special place in his heart. “I’ve had a good life, there’s no two ways about it,” says Pries, who proudly wears the World Series-like ring presented him last year when he received the Lifetime Achievement Award from the Professional Baseball Scouts Foundation. The honor will put his name alongside some of the greatest in baseball history, including Brooks and Frank Robinson, Jim Palmer, Earl Weaver, Eddie Murray, and Cal Ripken Jr.

Born and raised in Alameda, Pries’ road to the majors was about as straight as an R.A. Dickey knuckleball. The Cleveland Indians signed him out of high school as a 17-year-old, and he played professionally for nine years in the minors before trading in his spikes for a manager’s clipboard. Six years and countless long bus rides later, his keen attention to detail, and even keener eye for talent, landed him scouting jobs with the St. Louis Cardinals, the Oakland A’s, the Indians and, ultimately, the Orioles.

His ability to recognize talent was first tested during his tenure in the early ’60s with the renegade A’s. Pries had been following a young high school player out of Modesto named Joe Rudi, who eventually would become a star on the A’s championship teams and, later, one of the first players to test free agency when Gene Autry brought him to the Angels in ’77. When Pries finally got to see him play during his senior year, Rudi was hit during his first at-bat, breaking his left hand. “The second at-bat, he hits the ball 370 feet for a home run,” recalls Pries.

That was the only time Pries would see Rudi play that season, but he contacted his scouting director to tell him he wanted to sign Rudi for $15,000. He was told that Oakland A’s owner Charlie Finley wouldn’t approve the offer, especially since Rudi’s hand was in a cast. Pries, ever the negotiator, laughs at what happened then. “I told that scouting director to tell Charlie that if this young man didn’t make it to the major leagues, I’d give him his $15,000 back. Between you and me, it’s a good thing Joe worked out. I didn’t have $15,000. I was a scout working for $6,500 a year.”

When baseball is your life for 68 years, you accumulate a lot of stories about larger-than-life personalities. While watching the Portland Beavers of the old Pacific Coast League in Riverside in 1951, for example, Pries encountered Branch Rickey, the Dodgers’ legendary president and general manager. “He didn’t say anything to me except: ‘Don Pries … Batavia, N.Y. … 1945. You hit .315.’ He was an outstanding man.”

Pries made a name for himself during his years scouting prospects by wearing a tweed sports coat, a houndstooth hat, and saddle shoes (“I wanted to stand out from the other scouts,” he says). While scouting youngsters at an American Legion game, a father once introduced his 16-year-old son, Johnny Baker. Pries advised the boy, also known as Dusty, that if he kept playing hard, he could become a major leaguer.

“Today, every time I see Dusty Baker [former Dodger and current manager of the Cincinnati Reds], he looks at me, points, and says, ‘Tweed sports coat.’ ”

“Don definitely knew how to dress,” says Bobby Grich, another of Pries’ Orioles disciples who eventually made his way to the Angels. “He was a classy, very together guy. But he was approachable when he was roaming around the practice or game facility, too. He genuinely seemed to care about you and how you were doing. The whole Orioles organization was like that, about being part of a family. And Don was the guy most responsible for that.”

In ’74, Pries left Baltimore because the humidity was causing him health problems. His reputation as one of baseball’s finest scouting minds caught the attention of the MLB commissioner’s office, which wanted to know if he’d be willing to relocate to Southern California to work on a new concept called the MLB Scouting Bureau. Pries agreed to move his family to Newport Beach, and a new chapter in his baseball life opened up.

The first project for the commissioner’s office was to help design a software package to make statistics and other information available to all 30 major league teams. “This new program would provide teams with a way to get their scouting information instantaneously,” Pries says.

The bureau originally was designed to level the playing field in professional baseball by providing every team sound, accurate, and high-tech (for that time) videotapes of prospects throughout the world. For the first time, small-market teams that could afford to employ only a few scouts could better compete with the bigger clubs, which had more bodies on their payrolls.

Ueberroth later asked Pries to design a scout development program for MLB front office personnel, as well as former major league and minor league players, to educate them on the language and intricacies involved in evaluating talent. Pries explained that he knew nothing about that. “But they persisted. Pretty soon, I had not only developed a curriculum for the course, but also spent the next month developing a complete written workbook for it.”

That program remains one of the crown jewels in Major League Baseball’s scouting arsenal. Two 2-week courses are offered each year in Phoenix and the Dominican Republic. Since its inception, the program has graduated more than 1,200 students, 75 percent of whom eventually worked for a major league club, including six current general managers and dozens of scouting directors.

“When Don got involved in the scouting bureau, he was looking at an aging industry,” says Frank Marcos, the current director who served as Pries’ assistant for 10 years and succeeded Pries when he retired in ’98. “Scouts were getting older and the clubs weren’t bringing in any new blood. But Don was always thinking ahead. When someone in the commissioner’s office asked what could be done about it, Don said, ‘That’s easy. We’ll put together a scout school.’ ”

The program, for which Pries served as the lead instructor, initially had 22 students. “Some of the clubs told us it would never work,” adds Marcos, “but today we have more than 70 students at each session and turn students away. And it’s all because of Don.”

Pries has heard this type of praise before, and deflects the compliment with a “just-doing-my-job” shrug. Besides, his priorities have shifted. His says his teenage grandson, Jake, has a travel-team game in San Juan Capistrano at 3 p.m., and he likes to get there early. You just never know what kind of talent you’ll find out there.