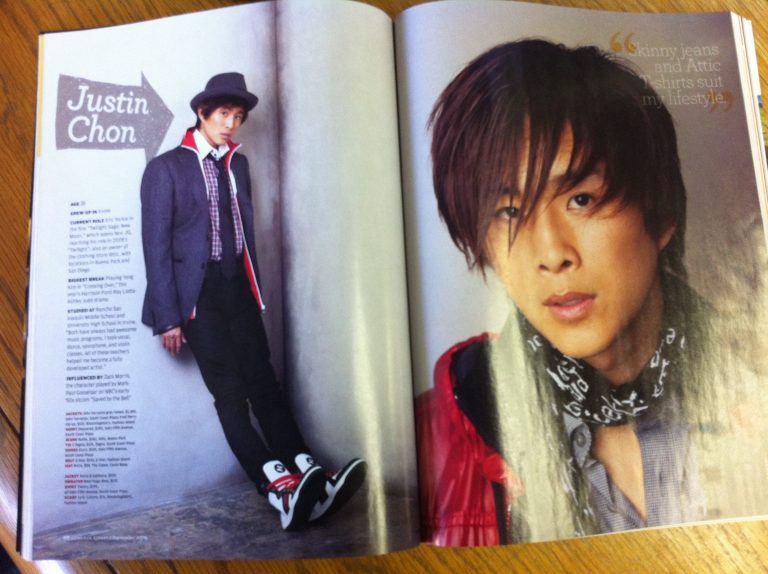 Check out this photo of an Orange Coast fashion spread featuring Irvine’s Justin Chon in the September 2009 issue. Now, poised to break out in his starring role in “21 and Over,” we nabbed Chon again for our March 2013 issue’s O.C.’s Own column.

He’s a surfer, violinist, and co-owner of The Attic chain of clothing stores, but those are just hobbies. Best known as classmate Eric Yorkie in the “Twilight” films, Chon stars this month in “21 and Over,” a buddy flick from the writers of “The Hangover.” The 31-year-old actor splits his time between Irvine and downtown L.A., and is determined that any newfound fame he garners won’t change him in the slightest.—Tyler Biddle

“I didn’t need any special attention, and they didn’t treat me like a pampered movie star.
I mean, I can get my coffee myself, you know?”
Justin Chon, on set etiquette during his first starring role

Chon’s mother, a pianist, sent him to art and music camps, where he learned to play piano, guitar, and violin. Chon’s father was an actor in South Korea before immigrating to the U.S. and going into retail. “He’s proud of me, but he’s also worried about my stability.
I think he wishes that I did more serious roles and less comedy.”

In the new film, shot on location in Washington state, Chon plays a student who celebrates a wild 21st birthday
with two of his best friends the night before a big med school interview. Playing a character a decade younger than himself was easy for Chon, who could relate to the rite of passage. On his own 21st birthday, he was in Seoul, studying Korean. “It wasn’t nearly as crazy as what happens in this movie, but I did end up waking up on the sidewalk.”

The casting for “21 and Over” was less stressful than for “Twilight,” he says. Chon landed his first starring role after two callbacks; “Twilight” required him to audition six times. He also says the tone on set was more lighthearted, and often felt like a big frat party with costars Miles Teller (“Footloose”) and Skylar Astin
(“Pitch Perfect”).

The University High alum spends a lot of time in Irvine and Costa Mesa, which he says has great coffeehouses. You also might catch him surfing off San Clemente or Newport Beach, or filming YouTube videos with friends that showcase his sense of humor (one shows him trying to convince a crowd that he is “that Asian kid from ‘Twilight’ ”).

Chon approaches potential stardom with caution. He wishes success for the film, but also knows celebrity could change his life. “I’ll still be walking around Costa Mesa and hanging out with the same high school friends. If people start recog-nizing me on the street and asking for autographs, that’s just part of the job.”