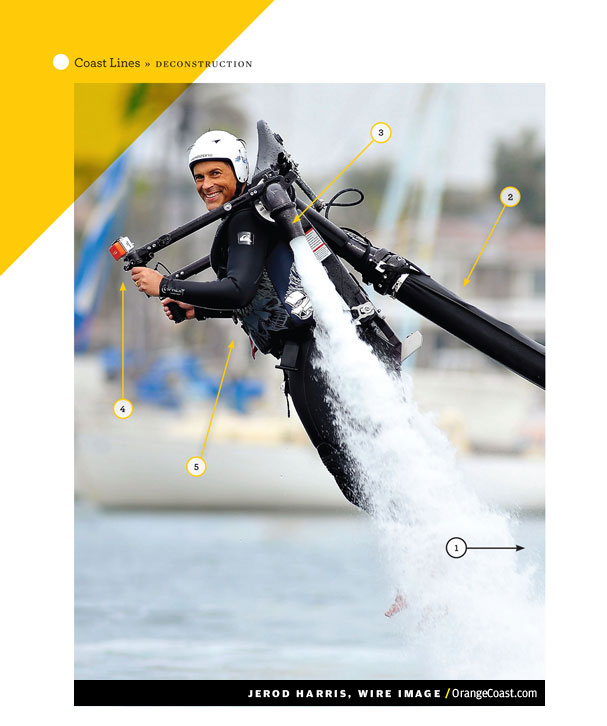 You, too, can make an entrance like James Bond. Jetlev, maker of the water-propelled jetpack, has an academy in Newport Beach where a two-hour training-and-flight lesson starts at $159. The ability to soar 30 feet above and below the ocean surface has attracted celebs such as actor Rob Lowe, above, and reality-show host Heidi Klum, whose “Germany’s Next Top Model” contestants posed while flying. One couple arrived at and departed from their Newport wedding via separate jetpacks. “It has aspects of parasailing, scuba diving, and Jet Skiing in it,” says Dean O’Malley, Jetlev Southwest’s president whose four-hour, 26.2-mile trip from Newport to Santa Catalina Island set a distance record. “You get to experience that rush in a whole new way.”

1 •  Boat
Accompanying the jetpack is a boat (not visible) that carries a 200-horsepower marine engine and a water pump. An onboard instructor receives transmissions from the flier’s walkie-talkie helmet “so the boat can adjust the [water flow] according to the flier’s needs,” says O’Malley.

2 •  Hose
The boat’s engine pumps water to the pack through a 10-meter hose at more than 1,000 gallons per minute, producing 420 pounds of thrust.

3 • Nozzles
When the water reaches the ultralight unit, it’s forced through twin nozzles that send the water downward. That thrust is what enables the flier to hover.

4 • Grip Throttle
The control arm operates the jetpack. Pushing the grip throttle up allows for more water pressure through the hose for greater altitude and speed; tilting it like a joystick determines where you’ll fly. O’Malley says it functions “pretty much like a motorcycle.”

5 • Harness
The five-point harness keeps the flier in a safe, prone position, whether soaring into the air or submerged in the water. Although able to dive 30 feet underwater, beginners usually skim the surface. All jetpack flights are staged in unobstructed water to ensure maximum safety while diving.