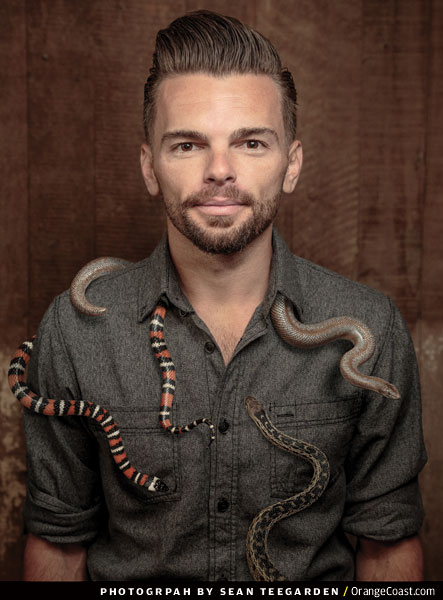 The Trade
Each year, 7,000 to 8,000 Americans are bitten by venomous snakes. And as urban development spreads, encounters with rattlesnakes become more likely. Magee’s Orange County Snake Removal has been clearing yards since 2007.

There’s never an ideal time to discover a rattlesnake in your coiled garden hose or under your trash can, and Magee has built a career by making those times a bit less traumatic. “I’ve had people buy a house, find snakes, and then move,” says the 29-year-old Dana Point native. “If I can just educate them and secure their property, they’d feel more comfortable staying.” With each week’s schedule set by the snake’s slither, Magee spends his days on-call, deporting vipers and installing custom fencing around at-risk homes. “Sometimes you don’t find any, but then I’ve found eight or nine on a property in a couple hours.”

Do snakes bite often?
Some bite, some won’t. It really just depends on their temperament, what kind of snake it is, and how warm they are. Some nonvenomous snakes are really, really mellow, but then you get things like coachwhips and striped racers that are high-tempered and love to bite.

A rattlesnake-bite kit comes in handy, no?
They’re more for comfort. The No. 1 thing to do is remain calm. Take off jewelry in case swelling occurs, keep the bite below your heart level if possible, and don’t move around. You don’t want to ice it, you don’t want to put stuff on it, you don’t want to try to suck out the venom—which can make it worse. Above all, seek medical attention immediately.

Are baby snakes more dangerous?
The truth behind this is slim to none. I’d rather get bitten by a baby than an adult. Adults’ fangs are longer, and they can inject venom deeper. Also, the amount of venom in their glands is far greater than what a juvenile possesses. The bad thing about a young rattlesnake is that their rattle is a small button. It makes the vibration, but it’s not loud. You also can’t see ’em as well.

When you get a call, where do you start?
First, I try to provide some education that will make the homeowners more comfortable and aware of snakes. A lot of fear comes from what they don’t know. If there’s a nonvenomous snake in their yard, I’ll just go up and gently handle it, and they’re just like, “Whoa … that’s it?”

And if it’s venomous?
I use tongs, similar to a trash picker-upper, to grab them by the middle of their body and put them into a 15-gallon, locking tub.

Then what do you do with them?
I’m required to release these snakes within a couple of miles from the removal site, as close as possible. Sometimes you can’t do that because of proximity to other houses, but I always take it to the closest wildlife area. If the snake’s unhealthy, it’ll stick with me until it’s healthy. The state Department of Fish and Wildlife won’t give me permission to release it because one with a bite, or tick, or respiratory issue could infect other snakes.

Is there a “rush” in all this?
No, it’s the hunt—which is called herping. It’s that giddy, little-kid feeling when you find something you’re really looking for. It’s pretty cool.

Where are snakes most often found?
Contrary to what most people think, you won’t find snakes out sunning themselves on a hot day. They stick to shaded, wet areas to avoid overheating. You’re more likely to find them out in the open during the morning and at dusk especially during snake season, from March through October.

Which parts of the county?
Shady Canyon makes up about 30 percent of my calls. A lot of snakes got pushed down that canyon by surrounding development, and the properties are pretty spread out.

How much do you charge?
For venomous and nonvenomous removals it’s $95. If we have to search the property, it counts as an inspection, which is $115 and includes any removals. It’s a flat rate no matter the size of the property or how many we find.

Tell me about the fencing.
It looks like chicken wire, with holes smaller than a quarter of an inch to keep out small ones and babies. It extends a couple of feet above and underground and costs $7.50 a foot. And I designed the print.

Most terrifying moment?
I was on a property in Yorba Linda. Rattlesnakes are heavy-bodied snakes, so they tend to stay lower to the ground. They can climb, but you’re not necessarily focusing on trees, you’re usually skimming the ground. The yard had a wall that was pinned with galvanized steel running across it for ivy to grow on, so it was really thick with growth. I was using my tongs to look through the bottom of the ivy, when all of a sudden I heard this huge buzz. I looked straight ahead, and it was a couple of  feet from my face. It was a rattlesnake that had crawled up on these metal lines. My heart dropped. … I wasn’t bit—but I was a lot closer than I wanted to be.

Any pet snakes?
No. I wouldn’t want to take one out of the wild and keep it in a cage. I’d rather just have it be out there.