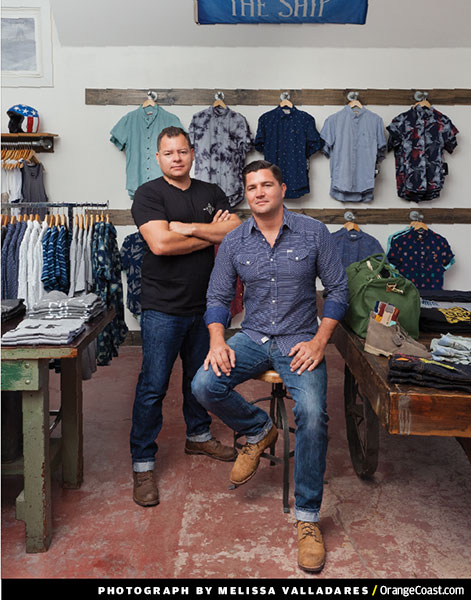 “There’s not a guy in America who wants to go to the mall,” says John Anderson, left, co-owner, with his brother Mike, of Tankfarm in Seal Beach.

Tankfarm started as a record label in 2001, and the brothers made branded T’s for their bands. But when they started selling more shirts than music, they changed course after two years to pursue apparel. As kids, they learned their skills in Dad’s screen-printing shop in Cypress, a business their grandfather started in the ’70s. Today they print funky graphics and sayings on items including button-up shirts, swim trunks, denim, and jackets. “Our vibe is a modern-day Bob Dylan meets Steve McQueen,” says John.

Their flagship store, open since 2012, carries the Tankfarm label, along with other classics such as Levi’s denim, Red Wing boots, and Bell motorcycle helmets. “It’s a place for active guys who want to look sharp,” says John. Prices range from $8 for a pack of scotch-dipped toothpicks to $800 for a leather jacket by Schott.

The decor is heavy on wood, concrete, industrial pipe fixtures, photos of old movie stars, Americana, and a life-size 1950s photo of their James Dean-esque grandfather on the sand in Laguna Beach. At the back, there’s a bar with stools.

Both owners are married fathers, with wives who have stores on the street—a flower shop and a boutique. Look for a second Tankfarm in Huntington Beach next year.

Photograph by Priscilla Iezzi
This article originally appeared in the September 2014 issue.