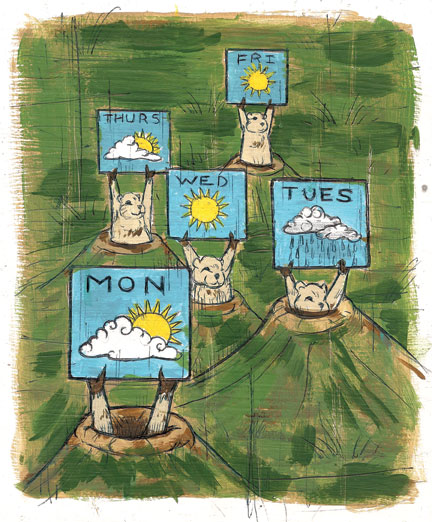 Q: With no groundhogs in O.C., what signs of nature predict our local weather?
You’re worried about winter in Orange County? Local Native Americans once believed that gophers relocating their burrows to higher ground was a sign of an approaching rainy season. According to the late historian Jim Sleeper, the pioneers had innumerable predictive “sure signs”—from heavy acorn growth to whales hugging the coast. These methods were about as dependable as ol’ Punxsutawney Phil. Since accuracy clearly isn’t a concern, let’s invent a new method of weather divination: If Jerry Brown comes out of his office Feb. 2 and sees his shadow … .

Q:  I hear Abe Lincoln gave Mission San Juan Capistrano back to the church. Did he visit Orange County?
Honestly, no. Spain ended the mission system in the 1830s, and sale of the land soon followed. But after California became a state, petitions were circulated to return the missions to the Roman Catholic Church. In 1863, while embroiled in a few other historic events you may have heard about, Lincoln signed documents in Washington that returned all California missions to the church. The way some folks around here carry on, you’d swear Abe had stopped for a beer at the Swallow’s Inn on his way down to ring the bells. There are stories that Lincoln planned to visit California after leaving office. That didn’t work out.

Q: We play softball at George Bellis Park in Buena Park. Who was Bellis?
George Bellis saved Buena Park. In the 1950s, the planned route of the 5 Freeway would have cut the town in half, with only one underpass—at Grand Avenue—and one exit, dooming the community. But Chamber of Commerce President Bellis successfully led the charge to put the freeway below ground level and add bridges and ramps. Plenty of towns had no such champion and disappeared during road development. Witness the town of Ocean View. Or rather, don’t.