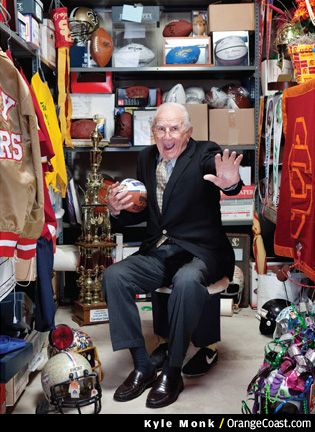 For every No. 1 pro football prospect whose selection in the annual NFL draft rivals a coronation, there’s the guy at the bottom, No. 254, a player whose reputation usually begins and ends with his college team, his family, and his agent.

That’s Paul Salata’s kind of guy. The nobody. The afterthought. Mr. Irrelevant.

“I root for the underdog,” he says, distilling in a few words the inspiration for Irrelevant Week, the heartfelt but inherently tongue-in-cheek celebration of the athlete picked last.

His Newport Beach nonprofit organization’s simple premise: to do “something nice for someone for no reason at all.”

The 84-year-old Salata, a fixture on the local sports scene since he was a standout wide receiver for USC in the 1940s, and daughter Melanie Salata Fitch, 56, give first-round treatment to the last of the last-rounders in the NFL draft, continuing a Salata custom that began in 1976.

Back then, the draft was a media-light, 17-round, two-day sprawl ending at the 487th selection, enough players to repopulate the active rosters of 11 of the league’s 28 franchises, with a few left over for the practice squad.

Clearly, the odds were long for No. 487 to make it in the NFL. But the thought that this player—in 1976 it was wide receiver Kelvin Kirk from the University of Dayton, drafted by the Pittsburgh Steelers—should be dismissed as trivia bothered Salata. So, he pitched an idea to a friend: Why can’t the league show respect for the hard work the late picks had done just to be recognized? His friend—Pete Rozelle, the commissioner and architect of the modern NFL—gave Salata the go-ahead.

And so began Irrelevant week, an early summer romp through a regatta at the Balboa Yacht Club, a trip to Disneyland, and activities that Melanie customizes to the athlete’s wishes. The high point is the All-Star Lowsman Banquet, a light roasting of the honoree by a selection of Salata’s many friends (sportscaster John Ireland hosts; former baseball Commissioner Peter Ueberroth, former USC Coach John Robinson, and Olympic diver Dr. Sammy Lee have appeared) and the presentation of Irrelevant’s answer to the Heisman Trophy: the Lowsman, a statuette of a player not stiff-arming his way gallantly to paydirt, but one aghast at the sight of the ball he’s just fumbled.

Melanie says planning for Irrelevant Week begins with the Super Bowl; the winner of the game often gets the last pick in the draft weeks later. In March, the Irrelevant staff—members of the Salata family and a changing cast of volunteers—talks to news media and various personnel attending the NFL Scouting Combine, a gauntlet of speed, strength, and skill tests that teams use to evaluate the incoming talent pool.

“The NFL combine is to see who the fastest and the smartest and the strongest are,” Salata says, “and I’m looking for the weakest, slowest, and dumbest.”

The NFL draft has been cut to seven rounds, with selections ending in the mid-200s, but the largely media-free marathon of the past has become a megapromoted ESPN blitz, a fast-forward “American Idol” in shoulder pads. The commissioner customarily yields the stage and microphone to Salata for the announcement of the last pick—this year Houston chose Cheta Ozougwu (No. 254) of Rice—after which Melanie starts preparing for the ceremonies.

Following a rollicking arrival at John Wayne Airport in June, Mr. Irrelevant gets what Melanie calls a  “debriefing” that night, during which the selectee finds out what the rest of the week holds in store: “I design it around what he likes, because it’s his week. It’s his 15 seconds, his five days of fame.”

Honorees who’ve asked for surfing lessons get a beach-oriented week. St. Louis Rams selection David Vobora (No. 252) wanted to meet the reality-TV stars of “The Girls Next Door,” which led to a road trip to the Playboy Mansion in L.A. for an appropriately chaperoned granting of the linebacker’s wish. Last year’s Mr. Irrelevant, Detroit Lions pick Tim Toone (No. 255), wanted a ride in the Goodyear blimp, which happened to be grounded for repairs. Still, Toone got a trip to the former air base in Tustin, where he boarded the off-duty blimp as it hovered inside the cavernous hangar, which seems somehow fitting.

Melanie, who exudes energy and good humor, says Irrelevant Week events are produced in a blur of activity squeezed into the narrow gap between the end-of-April draft and early June, before training camps start and Mr. Irrelevant heads off to try to land a job.

“It’s like planning six weddings,” says Melanie, whose command center is a desk in the pleasantly cluttered Irrelevant Week headquarters at the back end of an office complex so close to John Wayne Airport that the sound of jet engines interrupts conversation. She works with her father—who has his own office—from a whiteboard brimming with names and dates. This year, the NFL labor impasse added to the usual intensity, forcing the Irrelevant planners to consider an earlier date for the festivities because teams might need to rush players into camp if an agreement were reached.

The Irrelevant nice-for-no-reason credo is stood on its head when it comes to the celebration’s other purpose: benefiting Orange County causes. During the past 36 years, the Salatas are proud to have raised more than $1 million for area schools, athletic programs, and organizations such as Serving People in Need, and Goodwill of Orange County, mostly with proceeds from the $150-per-ticket banquet.

Toone, who studied at Weber State to become a physical therapist, says his visit to the Goodwill Fitness Center in Santa Ana was “close to my heart—to be able to see people unable to do normal things given the opportunity to work out and still feel they can be on their own and independent.”

“Paul’s a wonderful man in his own right,” says Jean Wegener, executive director for the nonprofit Serving People in Need, which helps the county’s homeless and working poor. “He has been giving back to the community for many, many years.”

Melanie attributes her father’s generosity to his upbringing during the Great Depression. The Salatas had seven boys, no girls. Their father died at 54 when Paul, the second-oldest, was young. Still, he managed to survive and even thrive in a two-bedroom, one-bath home in East L.A., where the garage and every nook in the house became a bedroom. All the boys worked to bring in money to help their mother.

Paul’s A-minus grade average and athleticism garnered him a football scholarship from USC, where he was a standout wide receiver who caught a touchdown pass in the 1945 Rose Bowl. After a stint in the Air Force, he played for the San Francisco 49ers, then briefly for the Baltimore Colts, and for three years in the Canadian Football League.

But pro athletes in that bygone era couldn’t depend on their salaries to pay their bills. “Slats” Salata, with his 6-foot-3 frame and good looks, found work in Hollywood as a stunt man and in numerous bit parts, mostly uncredited (in “Stalag 17,” he’s the bearded American who helps attack a fellow POW suspected of being a traitor).

What he earned, he yearned to give back. Irrelevant Week gave him an avenue to help others, to show his appreciation to Newport Beach, and to continue to honor football. “Our whole life was about football,” Salata says. “It got us from East L.A. to Newport Beach.”

Salata says he had no idea Irrelevant Week would have a life beyond its first year, let alone become a staple of NFL pageantry and a continuing source of enjoyment and enrichment to the community he has come to love.

“We were hoping for the best,” he says, “and the best happened.”

Five Who Achieved NFL Relevance
Bill Kenney  ’77 honoree* and San Clemente High grad was cut by Miami, but eventually made the Pro Bowl as quarterback for the Kansas City Chiefs.

Michael Green  The Bears’ 2000 selection as a defensive back paid off: eight seasons, recovered league-leading four fumbles in ’04.

David Vobora  St. Louis pick in ’08 has started 15 games as a linebacker.

Ryan Succop  ’09 Mr. I nailed 86.2 percent of his field goal attempts for the Chiefs as a rookie kicker, tying an NFL record.

* The penultimate pick, but ended up as Mr. I because the last pick was cut due to an injury.