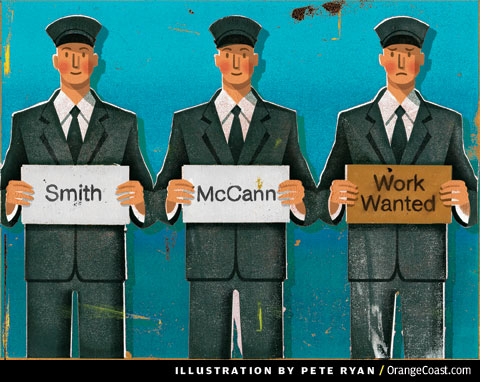 A few months ago, at the former El Toro Marine Corps Air Station, the massive runways that once carried the last century’s cutting-edge technology were showcasing what’s being touted as the technology of the not-so-distant future.

While a phlegmatic Japanese engineer sat in the driver’s seat with his arms folded, a robotic version of the Nissan Leaf negotiated stop signs, avoided cardboard “pedestrians,” and navigated through a mock-up of city streets as the steering wheel turned back and forth with what seemed to be a mind of its own.

Although the sight was surreal, proponents of driverless cars insist it will be common in less than a decade. “We’ll introduce an autonomous drive vehicle by 2020,” Nissan executive vice president Andy Palmer said after the demonstration. “Within two vehicle life cycles, we’ll make that technology available across the entire portfolio.”

Nissan is one of nearly a dozen automakers working on autonomous vehicles. A couple of these cars have performed competently on racetracks. Google has been testing its higher-profile driverless cars on public roads for several years. California and two other states have approved regulations permitting autonomous vehicles to be licensed (though their use is limited).

Meanwhile, editors and regular contributors at Automobile Magazine, who have no great love for products that blunt the excitement of the driving experience, recently declared autonomous vehicles the Technology of the Year. The vote would have been unanimous except for one holdout.

I don’t claim to have a better crystal ball than everybody else. But I’ve got this nagging suspicion that autonomous cars are going to be this century’s version of last century’s flying car—a technology that regularly graced the covers of magazines such as Popular Science and Popular Mechanics, but never quite made the leap into reality.

It’s not that I’m a Luddite. I appreciate and embrace technology. I understand that, in theory, robotic cars ought to dramatically reduce the number of automobile accidents, most of which are caused by driver error. And I’d be happy to turn over control of my car to a computer when I’m mired in rush-hour traffic or simply trying to get from here to there as mindlessly as possible. I’m just not very confident about this happening during my lifetime.

As it happens, I covered the inaugural Grand Challenge, the 2004 competition for autonomous vehicles in the Mojave Desert. The first year was a fiasco; none of the entrants completed the course. But the next year, five vehicles made it to the finish. Sebastian Thrun, the project leader of the winning team, later was headhunted from Stanford University to run Google’s groundbreaking driverless car program.

In 2005, I spent time with two large defense contractors that were developing autonomous vehicles for the military. I remember watching with amazement as a giant six-wheeler rumbled through the scrub near Barstow at a clip fast enough to raise a giant rooster tail of dust. Later, I was even more impressed by a Jeep-like vehicle that maneuvered robotically through dense forest while its principal architect followed its torturous progress in an SUV, alternately thrilled and distraught, like a father watching his son pitch a Little League game.

At the time, experts told me they thought it plausible that the military would meet its goal, established by the Department of Defense in 2001, of having one-third of all its ground vehicles operating autonomously by 2015. As it turns out, that’s not going to happen. In fact, the actual percentage will end up being closer to, well, zero.

Coincidentally, this lack of progress comes while unmanned aerial vehicles, or drones, are making headlines for their exploits—good and bad—in the Middle East. Of course, the great advantage of drones is that 99.99 percent of the world’s airspace is empty, so there’s nothing to hit, which makes navigation a breeze. The situation is more complicated on the ground.

We’ve seen a lot of progress in recent years. Most cars now are equipped with the sensors, GPS chips, and onboard computers that form the foundation for autonomous operations. We already take antilock brakes and electronic stability control for granted, and more sophisticated systems such as adaptive cruise control, lane-departure warnings, emergency braking assist, and automatic parking are becoming standard features. So it’s not hard to imagine cars that literally can drive themselves.

But this is a far cry from the typical fantasy of being able to climb into our cars, type an address into the navigation system, and have the on-board computer chauffeur us to our destination. Before that day comes, we have to teach cars how to play well with others, and that’s an immense challenge.

Think about the 5 or the 405 during rush hour—thousands of cars crammed into multiple lanes, each one coming from a different starting point and driving toward a different destination. At the very least, a rudimentary system of vehicle-to-vehicle communications would be necessary to prevent the world’s biggest fender-bender. That means developing insanely complex algorithms based on billions of lines of code.

Besides avoiding collisions with other autonomous vehicles, driverless cars also will have to deal with the 250 million nonautonomous vehicles on U.S. roads today. And since humans sometimes behave irrationally, robotic drivers will  face the difficult task of expecting the unexpected.

More autonomous technology is coming. But cars of the future will be less like chauffeurs than valets who simplify our lives. They’ll apply the brakes when we get too close to another car, nudge the steering wheel when we stray from our lane, even wake us up when we nod off. The engine will reduce power so we don’t spin the tires in the rain. The differential will lock up to prevent us from sliding off an exit ramp. In many cases, we won’t even notice their help.

The cars won’t be driverless. But they will be more driver-friendly. And that’s a future worth waiting for.