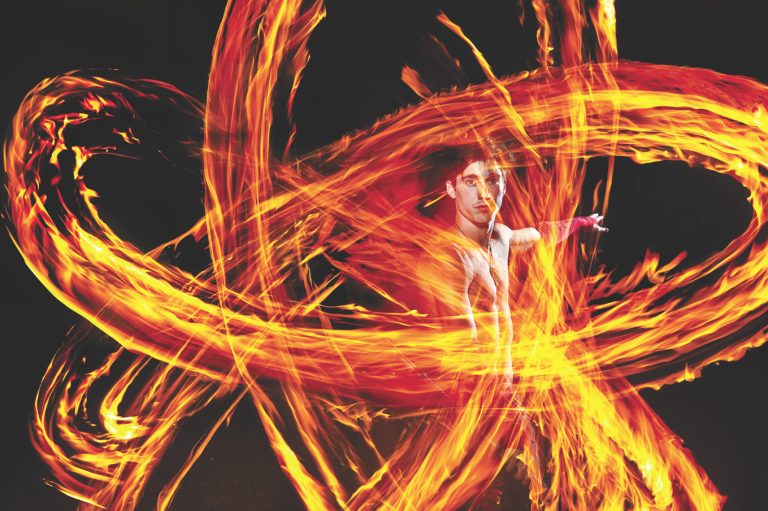 Every Tuesday night, flames fly through the air at an Anaheim parking lot as 28-year-old Curtis Husted and his 50-member Hellfire Society participate in a weekly jam session. It’s a circus-like atmosphere as they set fire to and then spin various hoops, fans, staffs, and poi (wicks on a chain) to music. Husted, a Cal State Fullerton student, started fire dancing after seeing a group perform at Nevada’s Burning Man festival. This month, he leads the Hellfire Society as it makes its debut at Burning Man.

How was your group picked for Burning Man?
We submitted a 15-minute video. They choose 28 groups out of 43 from around the world to be part of the Fire Conclave.

Can anyone come to a practice session?
We always welcome new people and love to teach them what we’ve learned. Controlling fire is an art form. It’s not hard to learn, but you have to get over the fear of fire.

Ever been burned?
I burned my leg once. It was because I was trying something new—a dress that can be lit on fire. But that’s very rare. I’ve never seen beginners get hurt.

Is fire dancing becoming more popular?
You see it at events more often now, and people are starting to realize what it is. When they first hear about it, they might think of luaus and stuff. That’s where it came from, but it has transformed. It’s about the community and the flow of movement.

See the show!
The Hellfire Society is available for hire for special events. hellfireshow.com