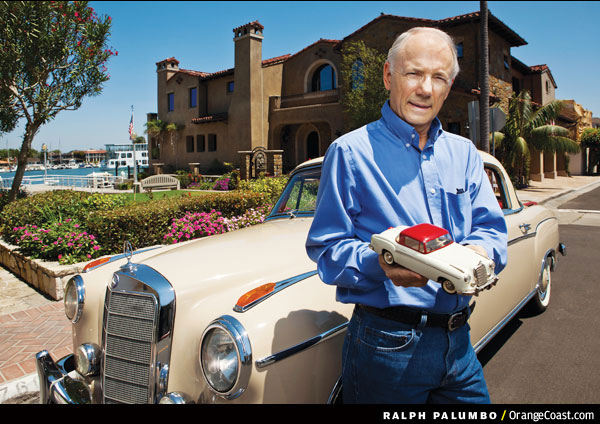 I’ve been following Philippe de Lespinay around his two-story house on Lido Isle in Newport Beach for the past two hours, dutifully taking notes as he shows me artifacts of a wonderfully accidental life that’s included stints as a motorcycle racer, slot car designer, wheel manufacturer, safety gear dealer and, currently, collector and dealer of antique toys.

He points to a model of a 1972 Indy in a wood display case. I already know that he owns and races a full-size version of the car built by Dan Gurney’s All American Racers in Santa Ana. But the fact that he created the paint job featuring a stylized eagle is news to me. “I didn’t know you were a graphic designer, too,” I say.

He smiles. “I wasn’t one of those guys who worked at General Motors for 35 years and then retired.”

At 70, de Lespinay is a charismatic French expatriate with an impish sense of humor and the joie de vivre of a man a third his age. Physically, at least, he has nothing in common with the salt-and-pepper machismo of Jonathan Goldsmith, the actor who achieved unlikely celebrity as the Dos Equis beer spokesman. And yet I can’t help thinking that de Lespinay is the Most Interesting Car Guy in the World.

Like many immigrants, he’s embraced the American Dream more thoroughly than most native-born Americans, and his life is a testament to possibilities this country offers to residents with talent, drive, and ambition. He was born in Spain and raised in France, but despite early successes racing and designing Grand Prix motorcycles, he decided to put down roots in the United States.

De Lespinay arrived in Bangor, Maine—the cheapest airplane ticket he could buy—in 1970 with virtually no money, no prospects, and no English. He found work at a gas station and slept on the floor until he saved enough cash to hitchhike to Southern California. Here, he landed a job designing toy cars—something that had fascinated him since he was a kid. “I wanted the real things,” he explains, “but I couldn’t afford them.”

As it happened, de Lespinay arrived during the slot car craze that swept the country in the late ’60s and early ’70s. Though largely forgotten now, electrically powered scale models that ran in grooved tracks were objects of desire for millions of adolescent and teenage boys. “By 1966,” de Lespinay tells me, “it was the largest hobby in the United States. There were more raceways here than bowling alleys.”

Slot cars were a perfect fit for de Lespinay. He loved toys, was crazy about racing, had an artistic bent, and was an intuitive engineer. He created lovely shapes for the models and invented a novel magnetic traction system that allowed cars to go faster. And he was such a good slot car racer that he turned pro.

“You’ve got to be kidding,” I say. “I’ve never heard of professional slot car racing.”

“I earned enough money and became sufficiently famous to make a living,” he insists.

By the mid-’70s, the slot car empire had crumbled. But de Lespinay seemed to enjoy a charmed existence. While helping a friend find a job, he’d met Dan Gurney, and when Gurney suddenly needed graphics for a new race car, he took a chance on the untested de Lespinay.

There was so little time that de Lespinay knew he couldn’t paint the race car. Instead, he dressed it up in contact paper—the stuff usually used to line kitchen drawers. Gurney liked the contact-paper design so much that de Lespinay continued to do graphics for All American Racers for the next quarter-century.

On another occasion, Gurney asked de Lespinay to translate when a French racing wheel manufacturer visited Gurney’s Santa Ana operation. De Lespinay ended up becoming the company’s American distributor and designed wheels that were used in Formula 1, the technical apogee of the sport. Later, de Lespinay went into the wheel business for himself.

Meanwhile, at the Long Beach Grand Prix, de Lespinay ran into an old friend he’d known from motorcycle racing. This connection led to de Lespinay establishing an American branch of Stand 21, a French manufacturer of fire-retardant driving suits and other safety gear. At its peak, the company employed 50 people and supplied 22 of the 33 drivers in the Indianapolis 500.

The money was good, but it was outweighed by the aggravation. So de Lespinay retired in 1995. “Since then, I’ve been a bum,” he says. A very, very busy bum.

At a workbench in his three-car garage, he custom-builds slot cars with remarkably accurate bodies, high-performance chassis, and hot-rod electric motors for collectors and racers who compete at a handful of remaining public tracks, such as Buena Park Raceway. He’s also working on a book about slot cars that he plans to write, design, and self-publish.

At the same time, he has returned to his first love—antique toy cars—and he travels all over the world buying and selling them. His house is studded with dozens of display cases filled with an astonishing variety of cars from different countries and eras. But he’s focused his collection on adorable and surprisingly detailed Japanese toys, usually with friction motors, based on American cars of the postwar period.

“I like American cars of the ’50s because they’re extremely extravagant symbols of success,” he says. “And I enjoy the Japanese toys because they were built with the sort of quality and character that you can’t find in toys today.”

These days, de Lespinay often putters around the house that he and his wife, Kathryn, an accomplished fine artist, built nearly 15 years ago. De Lespinay insists the place is in dire need of renovations. “On Lido Isle, you have the nouveau riche, and the old poor,” he says. “And we’re the old poor.”

To me, at least, it looks like an idyllic life. An implausible life, too, since de Lespinay followed none of the paths that supposedly lead to success in the contemporary world—no advanced college degree, no post-graduate professional training, no paying dues at jobs he despised or sucking up to bosses he hated. He simply made a career out of what he loves. No wonder he’s still passionate about life.