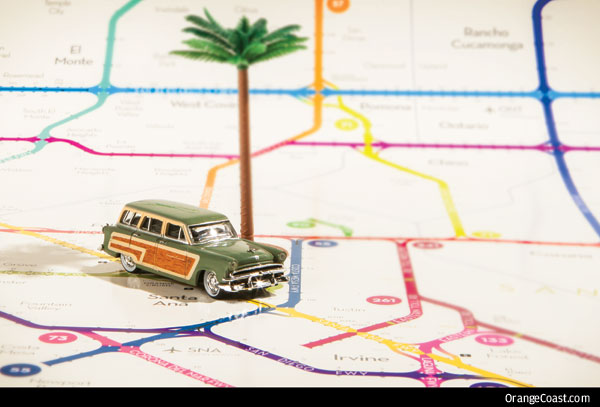 I distinctly remember the moment I fell in love with in-car navigation systems.

Twelve years ago, I was running late on my way from Edwards Air Force Base to Palm Springs. As it happened, my borrowed Acura was equipped with a newfangled GPS nav unit, so I entered my destination, and voila! Two hours later, and with minutes to spare, I swung into my hotel parking lot without a single stop for directions. Pure genius.

Of course, like any torrid love affair, my romance with GPS was—to channel Cole Porter—too hot not to cool down. Oh, I’m still in love, but I’m no longer besotted. Because since that trip, I’ve discovered that in-car navigation systems and the Google Maps app on my iPhone come with some annoying shortcomings.
The most frustrating, without a doubt, is map-reading algorithms that sometimes spit out totally screwy directions.

Recently, for example, I had to drive from Delaware to an obscure destination in rural Pennsylvania. I’d never been to the area before, so I was at my iPhone’s mercy. Instead of routing me along the interstate, it directed me to a shortcut along what appeared to be a state highway. The highway turned out to be a broad boulevard, and I hit dozens of stoplights along 50 seemingly endless miles of rush-hour traffic.

If GPS units have a systemic flaw, it’s that small screens make it hard to see the big picture. This isn’t an issue if you know the lay of the land—which roads go where and how they fit together. But when you’re in terra incognita, focusing on the details can leave you lost in the weeds. I learned this the hard way, over and over—long before the advent of GPS navigation—when I moved to Southern California 25 years ago.

I have the directional sense of a headless chicken. So getting my brain around the immense scope of the region and the vast number of freeways was a huge challenge. Further complicating matters: the freeways interlaced in a lattice more complicated than an Eagle Scout knot, which meant that every trip seemed to offer limitless mix-and-match possibilities. I still remember one hellish drive from Orange to Burbank that routed me, thanks to detours and traffic, along the 22, 405, 605, 91, 110, 5, 2, and 134 freeways.

I quickly amassed enough street maps to fill my glove compartment. Over time, I also bought hefty Thomas Guides—remember Thomas Guides?—for Orange, Los Angeles, Riverside, and Ventura counties. And I still got lost. All the time. Because just about every destination could be reached by at least two different routes, and it was almost impossible to tell by glancing at a single map which one was better.

What I needed, I often thought, was a simple, straightforward, immediately comprehensible big-picture resource. Why, I wondered, wasn’t there something like the iconic New York City subway map, which used bold colors to distinguish one rail line from another, making what otherwise would have been a hopelessly confusing transit system reasonably easy to navigate?

It took a quarter of a century, but my prayer has been answered. Not by Caltrans or a resourceful local cartographer, but by a moonlighting Boston graphic designer who’s never set foot in Los Angeles.

An urban planner by vocation, Peter Dunn was drawn to mapmaking because he enjoys the discipline of graphic design and believes it gives him a deeper, ground-up understanding of the area being studied. During the past three years, he’s created inventive maps of the Boston transit system, the Appalachian Trail, and the streets of Washington.

The freeways of Southern California are particularly challenging for a couple of reasons. First, they form what’s probably the most complex and confounding system of its kind in the country. Second, since Dunn lives 3,000 miles away, he had to spend countless hours gazing at online resources such as Google Maps Street View and Satellite View to “see” the precise location of exits, entrances, express lanes, toll roads, and other minutiae that are critical to travelers.

“This was my winter project,” he says. “In Boston, it’s nice to have something to do when you can’t go outside.”

As his inspiration, Dunn used Harry Beck’s timeless London Underground and Massimo Vignelli’s celebrated New York City subway maps. Unlike conventional highway maps, which are drawn to scale, these transit maps sacrifice geographical accuracy for better clarity. “They’re designed to give you the information you need to get from Point A to Point B,” Dunn explains.

So on his 24-by-36-inch poster-sized map, he depicted the 31 freeways, roughly 75 interchanges, and more than 850 exits found in Orange, Los Angeles, and portions of Riverside, San Bernardino, and Ventura counties. But no street names or points of interest (besides airports) are labeled, and sections that are especially complex are blown up to make them more legible. Simple sections are shrunk to save space.

Featuring a striking palette of festive colors and a typeface based on the lettering of seminal SoCal architect Richard Neutra, Dunn’s freeway map is a triumph of clean, concise, and remarkably clear modern design. He pre-sold 400 posters at $25 a pop through Kickstarter, and he’s already received emails from 500 other potential customers. He’s had a print run of 1,200 posters, which are available through his website, stonebrowndesign.com.

This is small potatoes in the grand scheme. But Dunn insists there’s still a place for old-fashioned maps in a tech-hungry world dominated by satellite-based nav systems. “I have a love-hate relationship with GPS,” he says. “It tells you where to go, but it makes you shortsighted. I’m the kind of person who wants to see the big picture.”

Me, too. GPS is the perfect device for a perfect world. But the world is far from perfect. So I’m going to keep one of Dunn’s creations in my glove compartment. I’m still happily married to my iPhone. But there’s nothing wrong with looking—just looking!—at options.