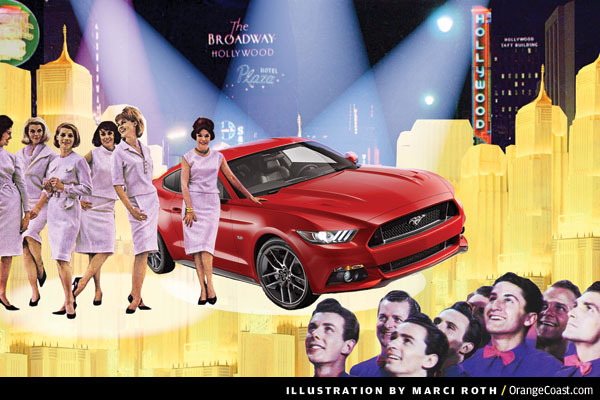 On a crisp Thursday in early December, I elbow my way through the crowd assembled in front of the cartoonish facade of the TCL Chinese Theatre in Hollywood. Lights, cameras, and big names fill the spaces between famous hand- and footprints in the pavement. But the occasion isn’t the opening of the latest installment in the superhero franchise du jour. It’s the first public look at a new car—the 2015 Ford Mustang.

These days, new cars rarely get coming-out parties, and only a handful are deemed important enough to merit glitzy unveiling ceremonies at car shows. A stand-alone debut is a relic of a bygone era when new-car introductions were a Big Deal. And here on Hollywood Boulevard, Ford is trying to recapture the 50-year-old magic of the premiere of the original Mustang, which was the most successful car launch of all time.

On April 16, 1964, ads for the brand-new Mustang (“Unexpected look—unexpected choice—unexpected low price!”) ran in thousands of newspapers and all three TV networks broadcast Ford’s commercials. The next morning, the car was formally unveiled at the New York World’s Fair, and the frenzy began.

One dealer locked his doors to keep shoppers from stampeding the place. A truck driver, mesmerized by a Mustang, careened through a showroom window. One buyer even slept in his new Mustang to make sure nobody else bought it out from under him before his check cleared. By the end of that first day, orders for 22,000 Mustangs had been written.

“I remember a lot of excitement and a lot of people coming to see it,” says Bob Robins, who was selling cars for his father at Theodore Robins Ford when it was on Coast Highway in Newport Beach. “The Mustang hit the market at just the right time.”

The car was championed in-house by a rising Ford executive named Lee Iacocca, who envisioned it as something that would appeal to baby boomers. Economical without being cheap, and fun without being impractical, the sporty-looking Mustang galloped out of showrooms. As Time reported, “By Detroit’s favorite yardstick—sales—the Ford Mustang is the most successful car ever introduced.”

At 52, North Tustin engineer George Najarian isn’t old enough to remember the original Mustang’s launch. But walking to elementary school as a kid, he distinctly recalls a yellow Boss 302 parked in a neighbor’s driveway. “And I’ve been fixated on Mustangs ever since,” he says. When the new Mustang is unveiled at the Chinese Theatre, his current ride—a ’12 Boss 302—is parked directly across Hollywood Boulevard.

The so-called 1964½ Mustang, the most factory-customizable car of the day, spawned a new era of personalized transportation. The car spoke to consumers across generations and socioeconomic classes, and continued to inspire passion long after the original car morphed into the Mustang II in ’74 and then to the Fox-body Mustang in ’79.

Growing up in Hawaii, Cynthia Uruu associated Fox-body convertibles driven by tourists with the carefree lifestyle she wanted to enjoy. After moving to Southern California, she endured a nightmarish blind date with a young man whom she thought was acting strangely. But he convinced her that he was woozy from having just repainted his wreck-damaged car—a Mustang, as it happened.

“If he’d been driving anything else, I don’t know if I would have cared to pursue [the relationship],” she recalls. “But he had a plus-one point for that Mustang.”

Three years later, she married the guy, George Najarian. His wedding present to her was an ’86 Mustang convertible.

While the Najarians move in for a closer look at the new model, I run into another equally fanatical Orange County Mustang devotee. By day, Frank Morales is the fleet manager at Villa Ford. In his spare time, the Villa Park resident has spent nearly a quarter-century as president of the Orange County Mustang Club.

Now 60, he figures he’s owned “north of 30” of the models over the years. His stable of keepers includes a high-performance K-code ’65 convertible, an ultra-
cherry ’66 coupe, and a supercool ’66 Shelby GT350H, with the H standing for Hertz. (Yep, they were part of the Hertz fleet until the company realized that renters actually were racing the Mustangs on weekends.)

“I like the older cars,” Morales says. “People still go gaga when they see them. I can’t tell you how many times I’ve pulled up to a gas station and somebody comes over to tell me about the Mustang owned by his father, his mother, his brother … you name it. The stories are endless.”

The 2015 model is, by all objective standards, the best Mustang ever. Roomier than its predecessors. Faster. More economical. It’s instantly recognizable as a Mustang without being slavishly retro.

Still, even the rosiest estimates don’t envision the car coming close to the original Mustang’s record of 418,812 cars sold during the first production year. Because with the new model, Ford no longer is trying to conquer the world, just the segment featuring other pony cars such as the Chevrolet Camaro and Dodge Challenger.

With hundreds of distinct models on the market, it’s hard to imagine any modern car being all things to all people. And while Ford did a remarkable job of limiting advance publicity about the new edition, I’m not sure anybody outside the automotive community really cares. These days, the product launches that energize people are smartphones, video games, and merchandise linked to celebrities. Unless they’re sporting alternative-energy powertrains, even brand-new cars seem like old news.

I don’t know how much passion the car will ignite among Americans who prefer Facebook to fuel injection. But on this day, at least, the Mustang once again is the biggest star in the automotive universe.