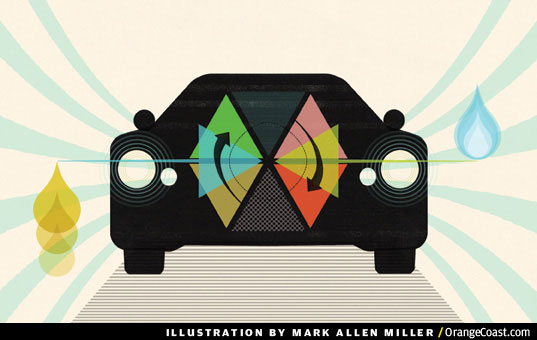 It doesn’t take long to realize that The CarLab isn’t your typical bean-counting automotive consultant.

First of all, it’s not in Detroit, home to the Big Three, or near one of the sprawling Southern California campuses of the Asian automakers, but in a funky little storefront in Old Towne Orange. The cramped lobby, which doubles as founder Eric Noble’s office, is filled with atmospheric black-and-white racing photos shot 40-plus years ago at Laguna Seca Raceway.

When I arrive, Noble eases his lanky frame into a leather wing chair with a bare foot dangling over one side. Two of the company’s senior consultants sit in director’s chairs by a plate-glass window that looks out at the lively street action on Chapman Avenue. Bob Martin is dressed in shorts and sneakers. Mike Dovorany is wearing a button-down shirt and actual shoes—he’s an MBA, after all—but even he wouldn’t be welcome in corporate boardrooms. The three refer to themselves as “agnostics.” But as we talk, I realize that “heretics” is more like it.

CarLab conducts market research, from forecasting to design analysis, for car makers and their vendors. As a consultant, it’s often the company’s job to tell clients what they don’t want to hear. CarLab’s analysis might show that a prospective vehicle won’t reach the rosy sales targets predicted in-house, or that the brand-new seats—sitting in giant crates that dominate the office when I visit—perform badly in a consumer clinic put together by the company.

Yes, they’re sensitive to environmental issues; I spot a copy of Sierra magazine on a coffee table. And the company eagerly promotes vehicles that reduce the carbon footprint of automobiles. But CarLab has no time for do-gooders who push technologies—electric batteries, fuel cells, hydrogen fuel, whatever—that work better in position papers than in the real world. As Martin says: “It’s always, ‘Oh, just give it another year and it’s going to take off.’ ”

But Noble and company recently came up with a plausible compromise between the zero-emissions vehicles we dream of and the gas-guzzlers we drive.

What they’re pushing are cars that use a conventional internal combustion engine fueled by a combination of gasoline and natural gas. The benefits are relatively modest. But so are the costs. According to The CarLab’s calculations, these bi-fuel vehicles would make enough sense financially for consumers to buy them in the  high-volume numbers that would make a difference to the environment, which hasn’t been the case with battery-electrics or biofuels, despite all the buzz they’ve generated.

In late 2010, the company was contacted by America’s Natural Gas Alliance, an industry trade association. Fracking had greatly increased natural gas production, and the group was looking for ways to strengthen demand. So the alliance commissioned The CarLab to explore programs to expand the use of natural gas in transportation. But when the company came back with its recommendations, Noble recalls, “We ruffled a lot of feathers.”

Not surprisingly, the natural gas folks want natural gas used as much as possible; ideally, cars powered entirely by natural gas. The CarLab’s research revealed that this approach was dead in the water.

The fundamental problem is that gasoline remains one of the planet’s most energy-efficient fuels. Granted, it comes with baggage. It’s a non-renewable resource. Most of it is found in countries that aren’t exactly friends of the United States. Burning it creates lots of nasty byproducts. But in terms of so-called energy density—essentially, how much power a given unit of fuel can produce—gasoline can’t be beat. Which is why it’s been the fuel of choice of the automobile industry for the past century.

A car run solely on natural gas wouldn’t perform nearly as well as its gasoline-powered counterpart. Also, to generate the range we expect of even a humdrum family sedan, the tank would have to be huge. It would take up all the space of a typical car’s trunk. In addition, there’s also the question of how consumers would refill the tank—no small challenge since there’s no infrastructure of natural gas stations for quick-and-easy fill-ups. If the checkered history of electric cars has taught us anything, it’s that most Americans aren’t willing to make significant concessions to preserve the environment. “Hybrids succeed because they require no compromises from consumers,” Noble says.

So in creating a template for natural gas-powered cars, The CarLab solution was a bi-fuel system built around a sophisticated algorithm that blended gasoline and natural gas in ratios that depend on the application—more gasoline for cold starts and brisk acceleration, for example, and more natural gas for low-speed commuting and highway cruising. That allowed The CarLab to design a tank compact enough to fit where a spare tire is usually housed. A tank this size conceivably could be refilled through a residential natural gas system.

Natural gas wouldn’t improve fuel economy, but because it burns cleaner than gasoline, it would significantly reduce emissions. And while a bi-fuel unit would add nearly $3,000 to the retail price of the car, cheaper natural gas would mean the upgrade would pay for itself in two to three years, a vast improvement over battery-electric vehicles. “This is doable right now,” Noble says. “We’re not asking for a breakthrough, and we’re not asking people to drive clown cars.”

Dovorany oversaw the retrofitting of four cars with these simple natural gas units to prove his point, and I recently sampled two of them—a BMW X3 and a GMC Acadia. They drove like perfectly normal sport-utility vehicles. At the moment, federal regulations favor other alternative fuels. But if automakers would get behind this technology, it’s clear that bi-fuel vehicles featuring natural gas would be a no-brainer.

In fact, Ford just announced plans to offer a natural-gas version of its F-150 pickup—the most popular vehicle in America—for fleet sales and contractors in 2014. Still, a bi-fuel vehicle represents an evolution, and true believers are holding out for a revolution. But I think Noble’s got the right idea. As he puts it: “Our position is that some of something is better than all of nothing.”