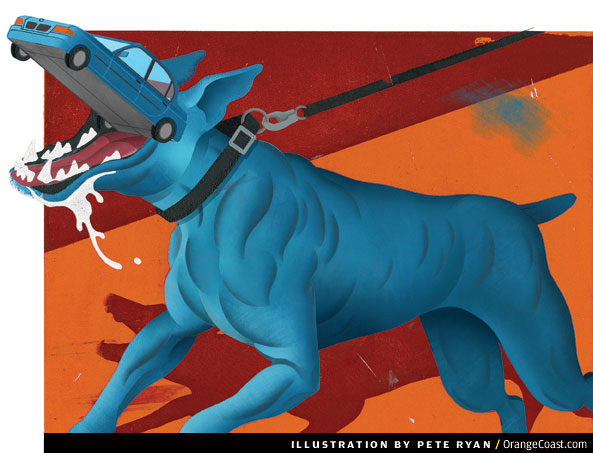 An anecdotal survey of a small sample of motorists in the United Kingdom recently revealed that the drivers most susceptible to road rage were men between the ages of 35 and 50 behind the wheels of blue BMWs.

I don’t usually pay attention to unscientific studies, but this one caught my attention because, as it happens, I drove a blue BMW M3 while I was in my 40s. Which got me to thinking: Am I one of those jackasses roundly hated by other drivers? I don’t think so. But then again, jerks usually don’t realize that they’re jerks, hence their fundamental jerkitude.

Because I write about cars professionally and I race recreationally, I take driving seriously. To me, it isn’t a largely mindless and generally tedious task, like taking out the garbage or walking the dog. It’s an art form that can be mastered only with ample helpings of study, training, and practice.

Of course, most people don’t agree, and their driving skills, or lack thereof, are perfect evidence of their ignorance. I often tow my race car with an underpowered pickup, which means I spend a lot of time doing the speed limit (barely) in the right lane. From this vantage point, I see a panorama of automotive cluelessness, rudeness, and incompetence that’s beyond belief.

Like other forms of social discourse, sharing the road comes with a host of unwritten protocols designed to make driving smoother, safer, and less aggravating. Unfortunately, driver etiquette isn’t taught in driving schools, and no longer seems to be passed down from generation to generation. But here are a few things you ought to know.

Don’t tailgate.
It’s ridiculously annoying and incredibly dangerous. In many cases, drivers don’t even realize that they’re mindlessly riding the bumper of the car in front of them. If that’s you, wake up! If, on the other hand, you want to go faster than the car in front of you, just switch lanes. There, wasn’t that easy?

Pass on the left.
When passing, remember that there’s a blind spot to the other driver’s right, since almost nobody in the United States uses their right-side mirror (or properly adjusts their left-side mirror, for that matter). That’s primarily why the left lane is reserved for passing slower traffic.

Speaking of which, no practice is more frustrating or pigheaded than left-lane squatting—hogging the lane while faster traffic stacks up behind you. In much of Europe, it’s illegal to use the left lane for anything other than passing, and flouting this law on the ultra-high-speed German autobahns suggests a death wish. Here in the States, there’s no constitutional right to camp there. And even if there were, why would you exercise it? If you’re not passing somebody, stay out of the left lane. If you’re in the left lane and somebody wants to pass you, move over. Problem solved. Oh, and if you’re going slower than the pace of traffic, don’t use the carpool lane. Yeah, I realize that you’re entitled to use it. You’re also entitled to fart in a movie theater, but it’s bad manners.

Use Entire Merge Lane.
There’s no mystery about the proper way to merge—when a lane ends. Whether it’s an entrance ramp or a detour, don’t merge earlier than you have to. Traffic studies have shown that it’s faster to use all of the available roadway before merging. Then, follow this simple rule: alternate one car from the left, one from the right, repeat as necessary. Don’t get me wrong: I don’t condone cutting in at the last second to get ahead of traffic. I don’t do that myself, and I don’t cut anybody any slack when they try to get cute with me. (I have a friend who habitually cuts in at the last possible instant, but in the interest of preserving good karma, he makes room for anybody who tries to do the same thing to him.) I can’t understand how people can justify backing up traffic for dozens, if not hundreds, of other drivers just so they can save a minute or two. Selfishness never goes out of style, I guess.

Use Basic Courtesy.
On the other hand, a lot of drivers misunderstand driving courtesy. Just because you signal doesn’t mean that I’m supposed to immediately let you into my lane. I’ll make room if you’re trying to exit or have some other obvious reason to move over. But if you’re just angling to avoid traffic, then wait your turn. You wouldn’t think of cutting in line at the grocery checkout just because you wanted to save time, would you?

Turn Signals!
Turn signals ought to be used for, you know, signaling turns. Is the act of driving so draining that you don’t have the energy to flick a stalk next to the steering wheel, thereby warning the drivers around you that you’re about to slow precipitously or, when turning left across oncoming traffic, come to a halt? I suspect that most people don’t use turn signals because they don’t notice turn signals—or, frankly, much of anything else. With rare exceptions, motorists plod along in a 2-ton cocoon of oblivion, with only a minimal sliver of consciousness devoted to the actual act of driving.

Because I’m a racer, people assume I’m a daredevil. Not so. In fact, everything I’ve learned on the racetrack makes me a better driver on the street. I look far ahead, so I’m not caught by surprise when something unusual happens in front of me. I’m aware of cars around me, so I know where to go if I have to take evasive action. And since I’m familiar with the performance limitations of my car, I can control it if something goes catastrophically wrong.

Driving briskly and decisively—which is I what I do—doesn’t mean behaving like an idiot. And there’s no excuse for road rage. But when you see somebody gesturing angrily at you and you mutter, “What the hell is his problem?” you just might want to take a good look at yourself in your improperly adjusted rearview mirror.