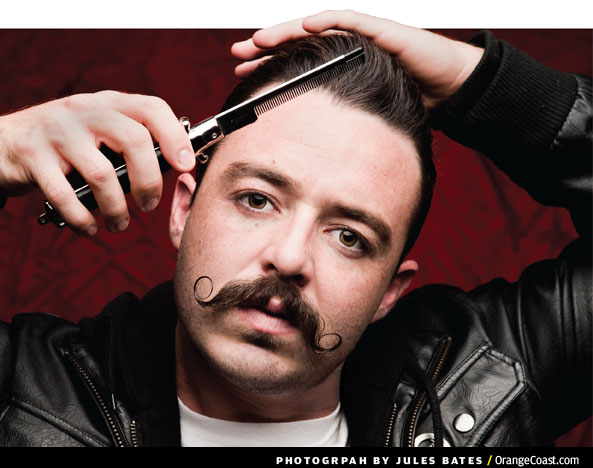 When the Costa Mesa resident and a few friends founded the Gentlemen’s Beard and Mustache Coalition nearly four years ago, they had two goals: to be involved in the sport of bearding, and to create a networking group of like-minded individuals. Thirty-year-old Harrigan, a stylist at Salon Gregorie in Newport Beach, is thrilled with what the club has accomplished, including collaborating in apparel design with Element Skateboards of Irvine, staging community events, and competing in bearding contests worldwide.

Your name’s Happy?
I got the nickname in the third or fourth grade and I’ve gone by it ever since.

Why start the GBMC?
A couple of us who had mustaches found out that Beard Team USA didn’t have a chapter here, so we made one.

What do bearding competitions entail?
They judge on size and style in different categories. Most of our guys do pretty well.

What does the club actually do?
We meet once a month and get some beers. We also put on events—parties, concerts. A few of us formed a band, the GBMC Band.

So if you had to shave …
One guy did for his wedding, and he was worried about getting kicked out, but it’s not really about that. Though, we do expect members to have facial hair sometime during the course of a year.

Still curious?
Check out the club’s upcoming events at thegbmc.com

Submit your facial-hair photos at orangecoast.com/mustache