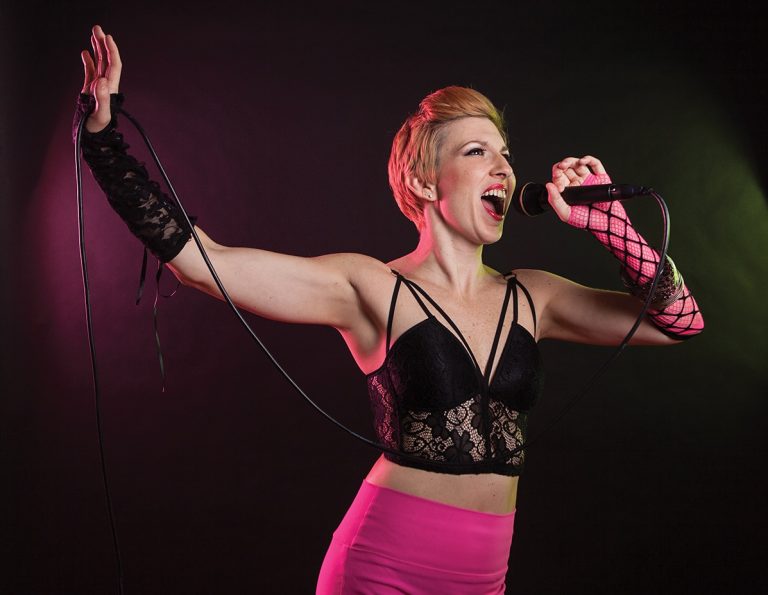 For belting out ’80s tunes while wearing tulle and leg warmers in public, this Orange County deputy district attorney is guilty as charged. During a typical day, the lead singer of the tribute band Back to the 80s goes from working cases to working the mic at local hot spots. And what do the Laguna Niguel resident’s suited coworkers think about her extracurricular activities? “They’re often shocked by my stage persona, since I’m quiet at work. But they think it’s pretty cool.”

How did you land on stage?
One day a few years ago, I noticed all my friends were getting married, having kids. It seemed like the expected thing to do. Instead, I went on Craigslist, where bands advertise for musicians, and decided to audition for Back to the 80s. The guys were older and had normal jobs—I liked that they were in it to have fun. We just gelled.
You’re 34. Do you even remember the B52s?
My parents were really into music. They didn’t have a ton of money, so every Saturday night we’d have a dance party to ’80s music. My brother and I had Devo hats, and I had Madonna outfits.
Do your coworkers ever come to shows?
I’d say about 50 of them have seen me perform. One time my supervisor came and he said, “You better bring some of that personality to work.”
Most memorable gig?
Performing at the House of Blues in Anaheim. We had an emcee and played to a packed house. I remember I got smacked on the bum and turned around to see a girl flashing me. I felt like a bona fide rock star.

Hear her sing!
See a list of the band’s upcoming shows at backtothe80sband.net