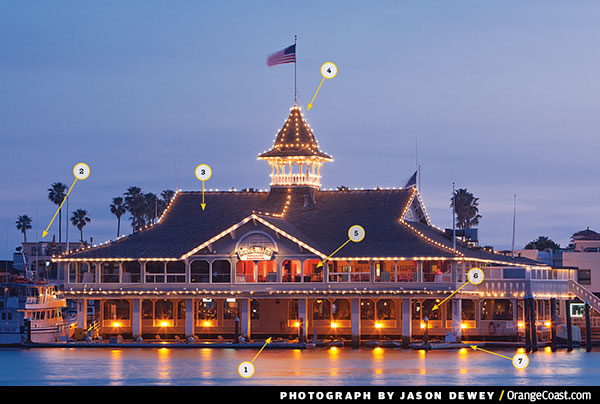 The building that helped transform Newport Beach into a recreational destination is steeped in a colorful past. “This is where working men and women would come to have fun and relax,” says Mike Donegan of the Catalina Passenger Service, a tenant in the 1905 landmark. Built as the southern terminus of the Pacific Electric Red Car route, the 8,000-square-foot structure was a bathhouse where L.A. visitors could change into their swimsuits. Succeeding tenants included a post office in the 1910s, a dance hall in the ’30s and ’40s, and a 10-lane bowling alley during World War II. This federal and state historic landmark, Donegan says, “was once a rough place with lots of gambling. It took awhile to transform it to where it was nice and respectable.”

1. Foundation
Built on wood pilings, the building was on the verge of being condemned in 1947 when pieces began falling into the harbor. The Gronsky family bought and modernized the pavilion before reopening it in 1949; they sold it in 1961. Eight years later, owner Phil Tozer added an oak staircase and a saloon to match the Victorian architecture.

2. Home Lots
Promoters formed the Newport Bay Investment Co. to finance the pavilion’s $15,000 construction, and made that back within a year by selling nearby lots for vacation homes. Parcels with promises of sewers and streetlights were advertised for as low as $300.

3. Card Rooms
During the Great Depression, patrons played blackjack, penny roulette, and other games in card rooms. Licensing fees from the lucrative, legal gambling kept the town afloat—a far cry from the ’50s when deputies shut down a bingo parlor.

4. Roof Line
The cupola and roofline are recognizable in silent-filmmaker Buster Keaton’s “College” (1927), in a race between rowing teams, and in “The Cameraman” (1928), as the Westport Yacht Club.

5. Dance Hall
Renovation in the ’20s made room upstairs for what was, for a time, the county’s only dance hall, attracting musicians such as Benny Goodman and Artie Shaw. The Balboa, an eight-count WWII-era swing dance, has its roots here, but the fast-moving jitterbug was banned due to the building’s deterioration.

6. Dining
The Harborside Restaurant opened in 2002 with a dining room that seats about 190. The seafooder claims the “longest happy hour in town”: noon to 7 p.m. daily.

7. The Dock
In the ’30s, sirens warned canoeists that speedboats were about to be launched at high speeds. Because a 5-mph rule was put in place, the Gronskys had to wait until they left the harbor before opening the throttle of their Leading Lady speedboat.

Flicks!
See the pavilion in Buster Keaton’s silent movies and learn how to dance the Balboa here.

Photograph by Jason Dewey
This article originally appeared in the August 2014 issue.