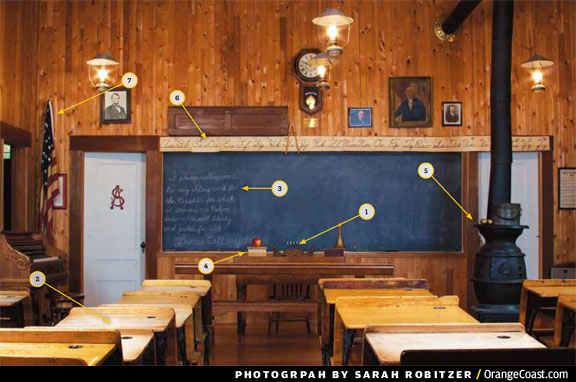 Even today, without a teacher, the one-room schoolhouse offers enlightening history lessons. El Toro Grammar School was built in 1890 at Front Street and Olive Avenue in what now is Lake Forest. First- through eighth-graders attended until the school was closed in 1914. Antoinette and Juan Pierre Gless bought the building the following year and relocated it to El Toro Road, where it reopened as St. Anthony’s Catholic Church and served parishioners until 1968. Eight years later, the abandoned building was given to the county and moved to Heritage Hill Historical Park for restoration. “When I saw the schoolhouse,” says 83-year-old docent Ellie Eckert, “I knew it was meant for me to help preserve.”

1. Teachers
Theschool’s first, Mrs. Clara McPherson, received about $50 a month and funded her own retirement so as “not to be a burden on society.” The average salary of an Orange County teacher today is $47,000—with a retirement plan.

2. Students
Twenty-nine, on average, attended the school and were seated by grade. For the current academic year, 502,882 students are enrolled in the county’s 606 public schools, with an average of 28.9 students per classroom, grades K through eight.

3. Audio/Visuals
Blackboards and chalk have been replaced by whiteboards and markers, and, in some classrooms, PowerPoint presentations. Also gone is the dirty after-school task teachers assigned to disruptive students: banging erasers.

4. Books
One hundred years ago, teachers often had to furnish textbooks. Today, in some districts, $500 iPads are replacing $100 textbooks that are revised about every 3½ years.

5. Heat
The Saddleback Valley School District, where the one-room school is located, budgeted nearly $4.5 million for heating, air-conditioning, and other utilities for the 2012-13 school year. Early teachers were responsible for stoking the wood-burning stove, which also kept lunches warm.

6. Penmanship
Cursive once separated the literate from the illiterate. Another digital-age victim, it’s now taught on a district-by-district basis, usually in the second or third grade. California and six of the other 45 states that accepted the new Common Core standards are fighting to restore cursive instruction.

7. Flag
Decades before Congress formally adopted the Pledge of Allegiance, students were greeted with a 44-star flag. In 2000, the Orange County chapter of the Freedoms Foundation of Valley Forge bought and donated more than 300 flags to classrooms that were without.