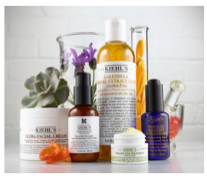 In addition to getting a newly renovated mall, Brea now has bragging rights to a Kiehl’s boutique. Elevating the skin and hair-care routines of loyal customers since 1851, Kiehl’s chose The Brea Mall as the lucky landmark to expand the chain’s presence, making it the second Orange County location (the other is at South Coast Plaza). Paying homage to Kiehl’s East Village New York roots, the store brings a modern Big Apple apothecary to north county, blending antique fixtures with modern neon flair.

To honor its new location and the company’s commitment to giving back, the brand partnered with CASA of Orange County, donating $3,000 to support its 2014 initiatives. In honor of the approaching Earth Day, Kiehl’s also teamed up with Ashley Judd and Anthony Mackie to release a limited edition rare earth deep-pore cleaning masque (get it at the new store), and has also donated $50,000 to Recycle Across America.