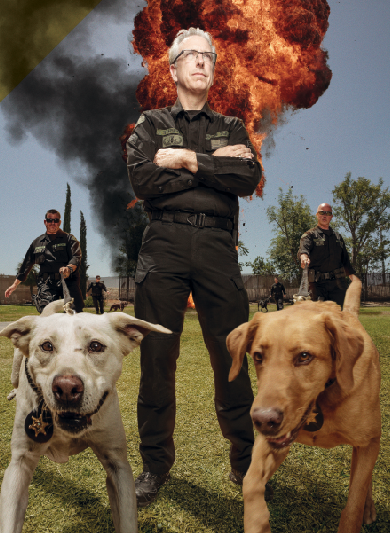 The Trade
The Orange County Sheriff’s Department bomb squad unit responded to 196 calls last year, ranging from hoaxes to homicides. With only 18 technicians to cover a region of 3.2 million people, teamwork means everything.

A member of the bomb squad since 1995, Sterett says a background in chemistry and biology are essential. “The two are strict requirements to be a bomb technician,” says the 50-year-old husband and father of two, “because a lot of the job is investigating evidence.” As the unit’s senior officer—he studied public administration at the University of Iowa and Cal State Long Beach—Sterett leaves much of the fieldwork to younger recruits. “Out of all the training, which can take three years, nothing prepares you like being out in the action.”—Oliver Putnam

Real life versus films?
Movies make it all about which wire to cut at the last second, and we’re OK with that. We’d rather people not know how bombs actually function, nor how we function. There’s a certain mystique that comes out of fear for our safety. That’s what made “The Hurt Locker” so entertaining. But, the movie didn’t shed light on how much teamwork is involved.

What kinds of calls do you get?

Law enforcement calls us to render safe dangerous situations, to collect and process evidence, and to assist with technical reports. We get called for suspicious packages, post-blast investigations, [improvised explosive devices], white powders in liquids, and to do canine sweeps. If something’s identified as an explosive device, fire and paramedics stand by while we disarm it. If an explosion has happened, we investigate and recover what evidence we can. Most of these occur in illegal THC labs, or with suicide bombers—that’s right, suicide bombers in O.C.

Really?
There was this guy who killed himself last year with a bomb in Costa Mesa, but the scary part was he’d been cultivating some sort of virus in his home. He was a conspiracy theorist and had booby-trapped the whole house with this virus replicate. This was the day before the Boston Marathon bombing, so that took everyone’s attention, naturally. It was scary, but after a long day all suited up, we cleared the house without anything getting set off.

Any other long days?
One situation lasted 72 hours: A pyrotechnic special-effects engineer for movies was hoarding 1,000 pounds of military ordnance explosives at four O.C. locations. Bomb techs wore their equipment the entire time and had to destroy the ordnance out in the desert. That guy definitely lost his job.

Tell me about your equipment.

We have nine robots, all different sizes, each with its own unique function. They’re remote-controlled and are always our first option. We also have an 85-pound bomb suit—the helmet alone weighs 12 pounds—and it’s our last resort because it’s more dangerous than using a robot. There’s no hearing protection, minimal on hands and feet, and—unlike in the movies—you can’t outrun a bomb blast. A blast wave with shrapnel moves about 2,700 feet per second, not to mention the suit hinders mobility. We also have bomb-sniffing canines we use for calls concerning suspicious items or vehicles.

What changed after the 2001 terrorist attacks?

We were small before 9/11; back then, the call was: “Go respond to a bomb threat.” Now training and equipment have increased, due in large part to funding and backing from the community. This support comes mainly from the public’s perception. We were seldom at large events because the public questioned any threats or need for law enforcement. After the attacks, we were well-received by the public.

The OC Marathon was one month after Boston’s, and we could not go 20 feet without being thanked for our service. However, support wanes a few months after any major incident. The pendulum always goes back and forth.

What do you look for in new recruits?
People with good work ethic and a healthy respect for explosives. We don’t want anyone who’ll freeze under pressure, but we also don’t want John Wayne types. Work ethic is most important because it means they’re willing to learn everything, including teamwork, because of the dangerous situations we’re put in. It’s not “The Hurt Locker” where one man does everything.

Calls you dread most?
The worst are homicide by bomb. There was this male nurse whose transgender roommate had recently ended a relationship with a boyfriend. Well, the boyfriend sent a package to the house, and unfortunately the nurse opened it. Ironically his last words were: “Watch this be a bomb.”

Strangest incident?
A box was left outside a police informant’s house. We X-rayed it first before we rendered it safe. Turned out it was a dead cat; I guess someone’s version of leaving a horse’s head. But don’t worry PETA, we didn’t kill it. We’re dog lovers; the unit has 12 of them.