Growing up in Anaheim, Smith performed every chance he got in community theater productions. He played the Mad Hatter in “Alice in Wonderland” at the La Habra Depot Theatre when he was 12. “To this day, my dad says it was the best role I’ve ever played. It’s his favorite. But I’ve since watched the tape of that performance, and I’m just screaming the entire show. For some reason, I thought that’s what acting was—yelling really loud.”

He grew as a performer at Orange County School of the Arts, graduating in 2013. “I knew the basic concepts of acting before I went to OCSA, but I learned how to be authentic at OCSA. I learned how to make choices. I’m very fortunate for having gone there.”

After landing supporting roles in a few films, Smith got the lead as the rapper Ezekiel “Zeke” Figuero in “The Get Down,” Baz Luhrmann’s Netflix series about the rise of rap and disco in 1970s New York. “I didn’t listen to hip-hop, but I had to rap for the audition. I was, like, I’m never going to get this. I rapped a Biggie Smalls song, and then I got a call back, and I met Baz, and everything happened. But once I started to learn about hip-hop, I was embarrassed about how much I didn’t know because it’s one of the most influential genres today.” 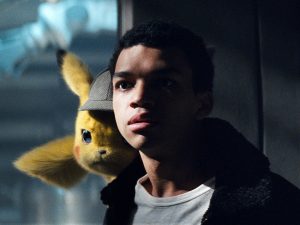 Smith was more than familiar with Pokémon before signing on for the Pikachu movie. “I had all the original Pokémon cards. My sister and I would play the games and make up rules. I still have the cards somewhere.” In the film, he plays Tim Goodman, who teams with Detective Pikachu, voiced by Ryan Reynolds, to solve the mystery of his father’s disappearance. The characters are the heart of the movie, but the two actors worked together only briefly. “For a week before we started shooting, we went over the script and we found our dynamic. That was the only time I worked with him, but he made an impression on me. He’s incredibly kind and like a comedic genius.”

The 23-year-old says acting with computer-generated characters was challenging. “I had some practice working with CGI characters with ‘Jurassic,’ but it was a little different because I didn’t have to interact with the dinosaurs; I just had to run away screaming. For this, I had to have a conversation with something that is not there, which took a bit of practice. But Rob Letterman, our director, had done everything in his power to make it as realistic as possible. We had puppets or people in green suits acting alongside me, so I could have something to react off of.”

The results surprised even him. “I saw the movie, and it looks like I’m really talking to (Pikachu). I was taken aback by that. It looks good enough to the point where people are not going to know how much work I did to make it look that good.”