Broadway veteran and Anaheim native Eden Espinosa released her sophomore album, “Revelation,” in January, showcasing her abilities as a powerhouse vocalist and a vulnerable songwriter.

Espinosa made her Broadway debut as the standby for Elphaba in the original cast of “Wicked” and hasn’t left the stage since, subsequently starring in “Rent” and “Brooklyn the Musical.” On top of releasing “Revelation,” she is also working on a new musical called “Lempicka,” playing the title role of a painter who made a name for herself in the Art Deco movement.

Although she has always been a performer, Espinosa didn’t realize her passion for musical theater until she attended Canyon High School in Anaheim Hills. “I played Maria in ‘West Side Story’ my sophomore year and Lawrey in ‘Oklahoma’ my senior year. I was in show choir at a time before ‘Glee’ was cool. That was the first time I met people my age who loved singing, dancing, and listening to cast albums. I feel like my world was opened up.”

After moving to New York in 2002, Espinosa landed the role as Idina Menzel’s standby for “Wicked” the next year. “It was a humbling experience. I did realize there were a few times I would go on—especially after (Menzel) won the Tony—I could feel the energy of the audience that they were disappointed that she wasn’t there, of course. You can also feel when you’ve won them over. When they realize, ‘OK. This isn’t gonna be so bad.’ You’re saving the day, essentially.”

Espinosa went on to play Elphaba in the national tour of “Wicked” in San Francisco and the first run of the musical in Los Angeles. “It makes me feel good that people remember me as Elphaba and that they’re still talking about it, because it was quite a long time ago. My particular version speaks to them for whatever reason. I played her on and off for seven years. It feels nice to be a part of something for so long and that also allows each woman to have enough individuality to make the role her own.” 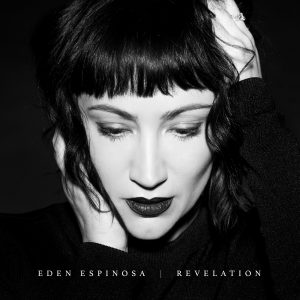 Espinosa voices Cassandra, Rapunzel’s best friend in “Tangled: The Series” on Disney Channel, which was renewed for a third season. For the former Disneyland performer, it was a dream come true. “I worked at Disneyland and performed in stage shows, parades, a cappella groups, and special events. I even did the voice for a fireworks show. I love that Disney is a part of my life. Doing voice-over is super fun because you don’t have to worry about what you look like. You can be as big as you want, as crazy as you want. On top of that, I get to sing original music by Alan Menken and Glenn Slater.”

“Revelation” is a follow-up to Espinosa’s award-winning debut album “Look Around.” “This album is made up of original music that I’ve co-written. As I’ve gotten older, I’ve gone through more and more breakthroughs about not being afraid to be my most authentic self. I’ve had a lot of battles with fear. That’s a main theme in this album. There are a couple songs on there that are just one pass-through, that we just thought was a ‘magic pass.’ It’s not slick or perfect or clean. It’s rough around the edges, but I like it like that. I wanted my album to be as human as possible.”

See her perform!
April 29 at Teragram Ballroom in Los Angeles