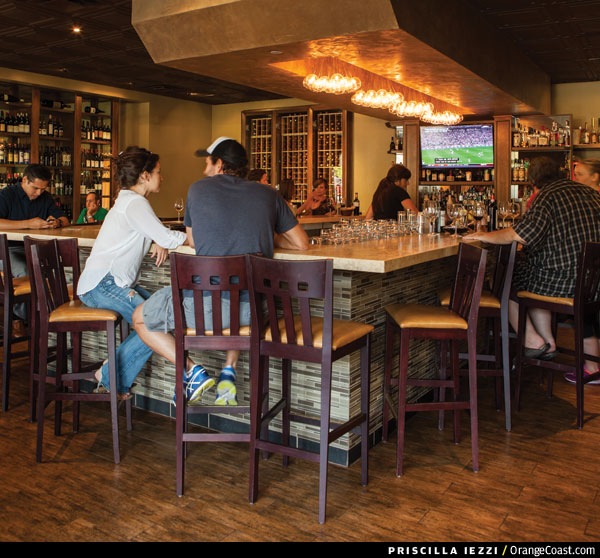 Back in the Clinton era, Rosine’s was the sole spot to chow down on authentic Mediterranean eats in the hinterlands of North County. Tiny but mighty, the modest storefront soothed frazzled commuters with golden rotisserie chickens, sold mostly to-go with the then-exotic sides of creamy hummus, vibrant tabbouleh, and savory bulgur pilaf.

Despite the eventual arrival of competitors Zov’s, Zena’s, and Zankou Chicken, impressive numbers of Rosine’s birds still fly out of the kitchen and into takeout bags or into the restaurant’s salads and sandwiches. The menu grows and the venue expands in a tenacious push to keep diners sated and engaged. Specials such as fork-tender, wine-braised lamb shank, and Pacific ono skewers with cayenne sauce have become menu mainstays, and a roster of gluten-free choices has launched a spin-off menu.

Rosine’s latest leap forward is a slick remodel that annexes the Starbucks next door, making room for a 20-seat bar, complete with new full-liquor license and a clutch of specialty cocktails. Owner Hagop Najarian knows his way around booze. His wines by the glass have long been a Rosine’s bragging right, and his collection of Chateau Musar wines from Lebanon is legend. The barkeep shakes a mean martini and pours the last drop just as our lebneh and muhammara arrive. This is that perfect haven for recovering from—or putting off—that soul-sucking drive home on the 91.

FYI
Owner Hagop Najarian once was sommelier at The Hobbit. His mother, Rosine, is executive chef.

Family Feast
Copious family-style dinners are $35 per person, parties of two or more.

This article originally appeared in the November 2013 issue. – See more at: http://www.orangecoast.com/dining/reviews/2013/10/21/main-course-brick#sthash.nbeaSmB0.dpuf