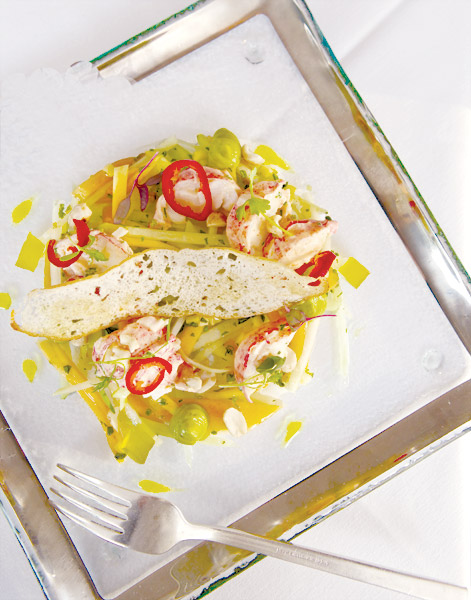 Leatherby’s Café Rouge is a crystalline jewel box of delights, hiding in plain sight in the world-class Segerstrom Concert Hall. Rarified and lovely, it’s the sleeper choice for fine dining that awakens only when the stages nearby come alive.

It took the foresight of executive chef Ross Pangilinan, at the helm since 2009, to embrace the artistic kinship between food and performance, which he does  with creative elan. In addition to his modern American fare, he composes prix fixe three-course, pre-theater meals themed to productions. This month, during the run of “Memphis,” look for “Memphis Lives in Me,” a roasted barbecue-glazed pork chop stuffed with honey-roasted apples paired with white-Cheddar-and-bacon grits, and creamed spinach. For “War Horse” come January, dessert will be “Devon at Peace,” an English trifle of Devon clotted cream and seasonal fruit.

Dazzling a la carte choices include a plush carrot-butternut squash soup with a flick of Fresno chili, or riotously colorful lobster salad with mango, papaya, avocado, mint, and cubes of crispy pork belly, all drizzled with a red chili emulsion. There’s always a house-made pasta, perhaps duck ravioli in brown butter with Parmesan. Grass-fed Australian rack of lamb is as good as you’ll find in this option-rich neighborhood; the herb-crusted lamb’s sidekick of artichoke, potato, pear, and goat cheese is spot on.

Bustling right up till curtain time, the dramatic room expels elegant theatergoers with astounding speed. In minutes, it’s all yours for a serene, leisurely meal.

Breaking through
Pangilinan has reinvented the creative menus, which now link to the world-class venue’s arts season and national touring productions

Matinee idyll
A lovely a la carte brunch is served before selected matinees.