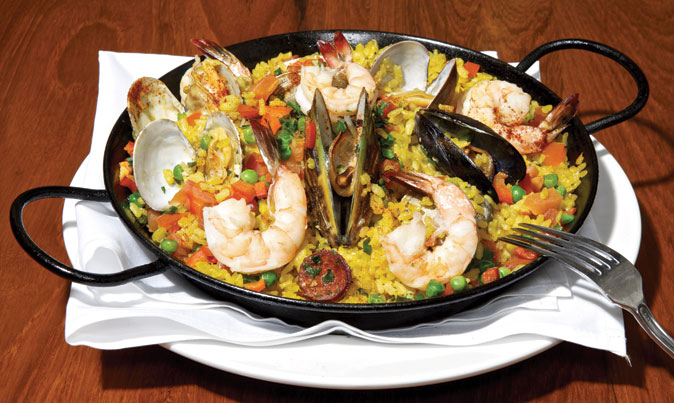 The dining room at Bluewater Grill teems with a rich cross section of Newport Beach: well-heeled retirees, gaggles of polished gal pals, date-nighters, and salty, sun-bronzed locals arriving on foot. All flow into this waterside fish house with the nonchalance of regulars, happy to await their tables over drinks, or snag a stool at the bustling oyster bar.

One night’s fresh halibut, cut to the size of a Rubik’s cube, is hot, juicy and not a bit overcooked in its crunchy, gold jacket of tempura batter studded with yam sticks. Sweet-spicy chili oil gives the snow-white meat some sass, but it also complements the tangle of cold glass noodles served alongside. It’s generations apart from the menu’s sauteed Wisconsin walleye or fried Ipswich clam bellies, American classics with old-timey allure. So bring your visiting Aunt Charlotte for fried smelt or your fussy co-worker for a luscious lobster roll, assured that you can delight yourself with the marvelous paella Valenciana. This seafooder is more than standing the test of time; it’s staying one step ahead of the game.

Corkage
Free for two bottles. More than half of the wine list is less than $40 per bottle; fair prices include Cakebread at $60.

Coming Soon
A waterfront sibling to open this summer in Avalon.