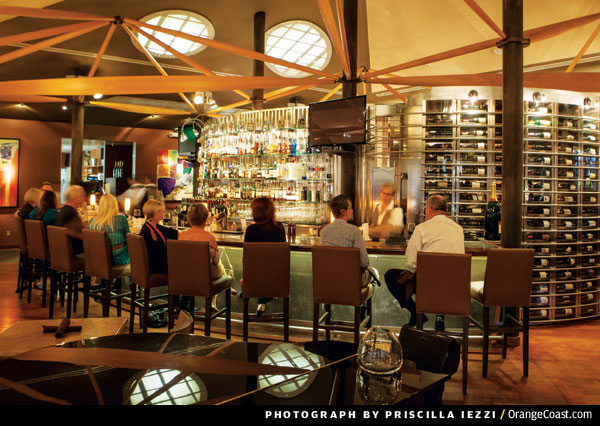 Bayside may be a teenager, but thanks to a glamorous makeover, the harbor-side venue is skipping over those awkward years with élan to spare. Long-favored by the coastal set for jazzy brunches, exec lunching, and VIP feasts, the 246-seat scene radiates fresh energy that complements the classy update.

No one misses those old, uncomfortable rattan chairs. Proprietor Marc Ghoukassian 86’d them in favor of padded seats that entice diners to linger. They blend tastefully with newly upholstered booths accented with rare macassar ebony wood. The dramatic silver treatment of the room’s bisecting wall draws the eye to the boldly modern art that is a Bayside signature. Ghoukassian swaps out the 22 large pieces every quarter, and he’s currently featuring auto collector and “color fusion” artist Dick Marconi.

Veteran Paul Gstrein remains top chef, and he’s found room for menu additions that fit seamlessly under New American cuisine. Paella, packed with shellfish, sells well, but note that it’s made risotto-style instead of with traditional long grain rice that creates the golden crust, socarrat. Look for expanded Prime Black Angus offerings, such as a flavorful culotte steak, sliced for easy eating. Roast rack of lamb is a solid, if safe, bet. So is the properly grilled swordfish, with a heap of lemony risotto. Seasonal oysters are reliably fresh. They’re certainly tastier than the crab cake, which, like so many others, is a mishmash of crab shreds. Three-course prix fixe menus at dinner and brunch are the lazy diner’s path to happy indulgence—just right for blissing out in those new chairs.

All That Jazz
Live jazz nightly, and other live music at Sunday brunch. Stay late on Fridays for an honest-to-goodness jazz jam.