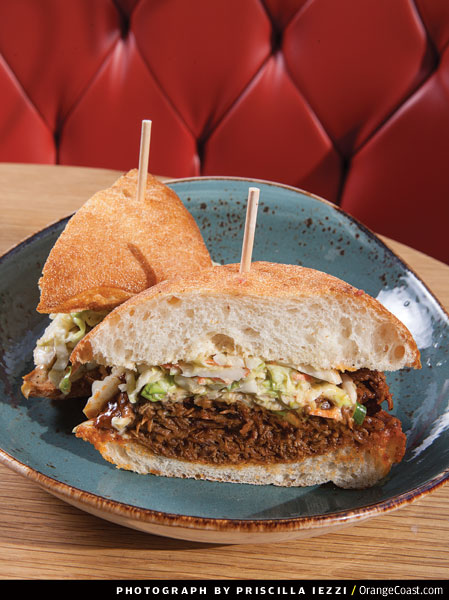 Is there anything less faddy than a delicatessen? The form might vary—chockablock ethnic, sandwich emporium, or comfort-food canteen—but all of O.C.’s models are cherished and long-lived. So when two new ones appear within four miles of each other, both in revitalized city centers, they warrant test drives. C4 Deli in Santa Ana, and Provisions Market in Orange are like twin sons of different mothers. Open since last summer, they’re similar, but with plenty of quirky differences to define them.

Proudly reclaiming a 1915 corner storefront in Santa Ana’s Artists Village, C4 Deli deems itself the “cure for the common.” Narrow, with 15-foot ceilings, the brick-lined berth’s focal point is a 12-stool counter that attracts regulars for sandwiches washed down with a rotating lineup of thoughtfully chosen draft brews. Beyond is where chef de cuisine, Alex Straziuso, cures the meats, pickles, and eggs to build blue-collar fare that typically stars sandwiches concocted with grace.

A handful of sandwiches stand out. The tender BBQ Brisket has a rich, mellow sauce that plays well with fresh coleslaw and the soft ciabatta bun. Tamer, but still tasty, the Real Honest Turkey on wheat is a virtuous choice, but requesting an extra dose of malt vinegar aioli gives the free-range breast meat welcome dimension. Classic pastrami with powerful mustard on gorgeous marbled rye bread, though not stacked sky-high, is even more satisfying when layered with coleslaw, New York-style. Or pastrami again, on a masterful Reuben with Swiss cheese, sauerkraut, and Russian dressing. Both the corned beef and porchetta sandwiches prove problematic—sometimes the beef is jerky-tough, sometimes the porchetta is overpowered by  robust sauteed broccoli rabe. And I can’t resist the humble Spanish Sandwich of prosciutto, manchego, and roasted red peppers that recalls tapas bars in Spain. What a savory way to metabolize boozy skylarking.

Aside from the occasional handwritten sign pointing out a hot deal on wines or other bottled gems, the retail goods are not well-merchandised. Elite hot sauces and precious coffee beans are nearly out of sight and reach. Only the most determined shoppers will bother. Wines and beers are easier to grab, and how nice that prices don’t have a greedy markup.

Launched in 2011 as Bruery Provisions, a deluxe tasting room by the namesake Fullerton brewery, this Old Towne shop morphed into Provisions Market after joining the Haven Collective last June. While Provisions (and siblings Haven Gastropub and Taco Asylum) still serve many Bruery bottlings, Haven has the chef muscle needed to make a real go of a dine-in bottle shop.

Thanks to a newly relaxed liquor license, drinkers can partake throughout the space, not just on the scruffy rear patio. This alone boosts the energy and action in this converted 1919 space that was the venerable Orange Paint Store a decade ago.

A full array of gourmet edibles, all chosen to harmonize with a connoisseur’s selection of beer, wine, cheeses, and meats, is displayed near the front door. It’s easy to get lost in those artisan goods on your way to the hefty deli counter where beer geeks, Chapman professors, and gaggles of locals place orders for snacky small plates, creative sandwiches, and lavish charcuterie and cheese platters. Some pay and dash, others linger at communal tables and seats around upended vintage barrels.

Executive chef Greg Daniels oversees the always-changing roster of modern snacks, salads, sandwiches, and open-face “toasts.” The list isn’t long, but on every visit, items I want to try aren’t available. So, don’t set your heart on, say, tomato confit or porchetta di testa. Stick with the sure-bet charcuterie, pickled egg halves, beet salad with spicy marcona almonds, board of seasonal pickles, and velvety house-cured salmon on toasted sourdough—dishes always on the menu at sibling Haven up the street. Other winners are a sparkling wedge salad, and a Cuban sandwich with Zoe’s smoked ham.

You’ll find intriguing bottles in the wine bins, but this is unquestionably a brew wonk’s paradise. Wil Dee oversees 30 taps, with a rotation ranging from local favorites to limited editions to classics from cult breweries such as Russian River, Cantillon, and Cascade. Add an impressive cheese and meat case, and this easily is Orange’s most upscale choice for stocking a larder or downing top suds.

Photographs by Priscilla Iezzi
This article originally appeared in the April 2014 issue.