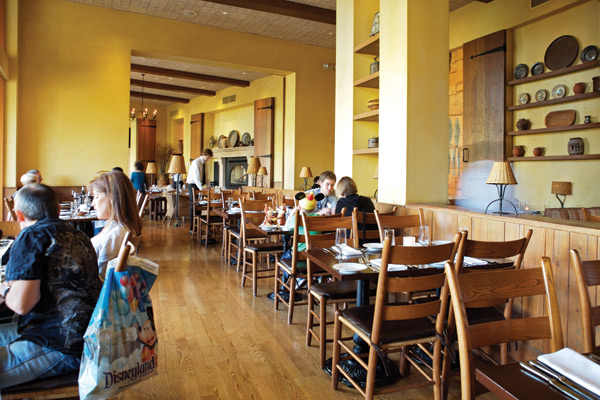 Our cozy table is midway between the fireplace and the balcony. The sun is setting fast. We nibble on slices of yeasty French bread, sip dry white Bordeaux, and pluck glistening Lucque and Gaeta olives from a plentiful bowl as we ponder the menu. The rustically handsome room is rather quiet, so our food-savvy waiter has time to weigh in on the choices we’re considering. Clearly, we are at that splendid intersection of ease and delicious anticipation.

And it happens in a most unlikely place: Downtown Disney.

Catal Restaurant is better than I expected. Set dead center on the Downtown Disney promenade, it’s primarily an upstairs restaurant with a detached saloon, the Uva Bar, on the street nearby—a flashy kiosk for premier beers, appetizers, and tourist watching. It’s certainly better than it was on visits in recent years. It’s now hoisting itself to an altitude previously dominated by neighboring Napa Rose. Being a Patina Group restaurant (one of a few in Disney’s retail row), chefs do come and go. As I write this, Nick Weber is executive chef. After stints at Pinot Provence and Blanca, it’s a homecoming of sorts for him, considering he first worked the kitchens of Catal as far back as 2003.

An appetizer of dewy, house-made ricotta arrives just in time to prevent us from filling up on olives. It’s a refreshing starter—the mild, fluffy white curds flattered by a dribble of wildflower honey ready to spread on crusty crostini. The combo is so simpatico; the accompanying slices of fresh strawberries are hardly necessary. Caesar salad is commendably light and lemony, and the romaine is cold and crunchy; white anchovy and Parmigiano-Reggiano add savory authenticity.  One night’s appetizer of grilled baby octopus with a confetti of Sherry-vinegared vegetables looks promising, but the octopus is impossibly rubbery and tight.

The ham on tomato bread is utterly simple and wholly Spanish. With so few ingredients in the dish, Weber wisely goes straight for the primo stuff—Jamón Ibérico de Bellota, one of the world’s priciest hams, and lets it shine against grilled bread scrubbed with a fresh tomato. This, and the crispy piquillo pepper risotto croquettes with zesty arugula aioli easily make a light summer meal.

Curry-roasted root vegetables supply heft to the grilled tuna, with nutty, toasted farro as the starch. Bucatini pasta with spicy tomato sauce may seem a bit ordinary in this company, but the stout strands with pancetta, toasted garlic, and pecorino cheese taste of kismet one rainy day. This dish is knit together so well, who cares if it isn’t terribly Spanish?

For dessert, our waiter wisely endorses the panna cotta, made with coffee and Bailey’s. The silky custard is a knockout. But it’s the peanut butter-chocolate bar that makes me down every bite. What sounds heavy on the menu turns out to be a masterful layering of sweet, salty, smooth, and crunchy. I imagine returning for this and a glass of port, maybe with a seat on the balcony in time for summer’s nightly fireworks ritual.

Did I just say I would willingly revisit Downtown Disney?

That’s high praise from this Disney grump. Apparently, Catal is working its own brand of magic these days.

DEAL
The Patina Group has long championed the zero corkage fee, so BYO and tip your server accordingly.

FYI Reserve ahead for balcony seats during fireworks season.