Oct. 23: Tony Bennett. Really, that’s all we need to say (Segerstrom Center for the Arts).

Nov. 20: If you want to see the Berlin Philharmonic, better act now—it’s been 15 years since the orchestra was last in town. Conductor Sir Simon Rattle oversees a program that includes Brahms’s Symphony No. 2 (Segerstrom Center for the Arts).

Dec. 1 through 3: Pianists are the key to Pacific Symphony’s season; of the 12 classical concerts, seven of them feature guest artists on the ivories. This month, it’s MacArthur Fellowship winner Jeremy Denk in a concert of Viennese music (Segerstrom Center for the Arts).

Jan. 19: Ladysmith Black Mambazo stirs the spirit with its gospel-influenced South African music, which has moved audiences around the world for more than 40 years (Irvine Barclay Theatre).

Jan. 21: Kronos Quartet is part of the Philharmonic Society’s Eclectic Orange Series and the concert lives up to that name—on the bill are The Who’s “Baba O’Riley” as well as a new work commissioned by the philharmonic society as part of the 50 for the Future: Kronos Learning Repertoire to nurture young string quartets (Musco Center for the Arts).

Feb. 7 through 12: Cellist Johannes Moser is this year’s artistic director of the Laguna Beach Music Festival; he’ll perform solo, with the Calder Quartet, and in a finale with music for up to a dozen cellos (Laguna Playhouse).

Feb. 8: They’ve got the beat—the taiko drumming group Kodo presents its latest show, Dadan 2017, complete with its centerpiece instrument, the O-daiko, which weighs in at almost 900 pounds (Segerstrom Center for the Arts).

Feb. 15 and 16: Between “Stressed
Out” and “Ride,” Twenty One Pilots has been all over the radio in 2016. Now they’re on tour—and your kid probably already has tickets to the show (Honda Center).

Feb. 21: The Maria Schneider Orchestra is led by the composer/ conductor whose two latest Grammys came earlier this year—one for her pastoral “The Thompson Fields” jazz album and the other for a collaboration with David Bowie (Soka Performing Arts Center).

Feb. 23 through 28: As part of its initiative to give opera a presence in Orange County, Pacific Symphony, joined by Pacific Chorale, presents a semistaged production of “Aida” (Segerstrom Center for the Arts).

Originally printed in Premiere O.C. Fall/Winter 2016-2017 – from the Publishers of Orange Coast 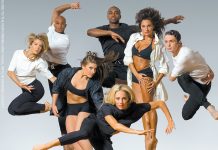 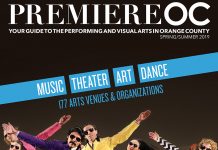