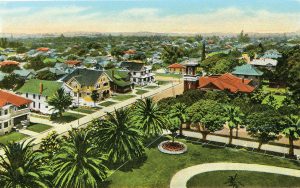 Drive through downtown Santa Ana, and it’s almost impossible not to be struck by the grandeur of the historic buildings lining the streets. Imposing and majestic, they leave the unmistakable impression that the earliest settlers envisioned a fine future for the city.

No structure makes that point quite like the Old Orange County Courthouse. Built in a striking Romanesque Revival style from Arizona red sandstone and Temecula granite, it has been featured in movies such as “Catch Me If You Can.” The courthouse was deemed seismically unsafe, and it closed in 1979 before being restored and revitalized. Today it’s home to the Orange County Archives and a museum of Orange County history, as well as a marriage license bureau and chapel.

This month, as Santa Ana celebrates its 150th anniversary, the city’s buildings and neighborhoods tell its story: from an outpost for farmers and ranchers, to the social and political center of Orange County, to a center for innovative arts, food, and culture.

FOURTH STREET (CALLE CUATRO)
Department stores such as J.C. Penney, Buffums, and Montgomery Ward lined Fourth Street from the 1920s to the 1960s. 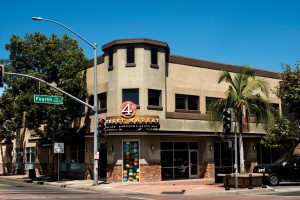 THE GRAND CENTRAL ART CENTER
The anchor of the Second Street Promenade, celebrates its 20th anniversary this year.

GRACEFUL VICTORIANS
Many of the city’s mansions were converted into rooming houses in the 1940s to accommodate the wives of military men stationed at the Santa Ana Army Air Base.

THE SANTA ANA REGIONAL TRANSPORTATION CENTER
When the Mediterranean Revival-style Santa Ana Regional Transportation Center opened in 1985, it was one of the largest new transit centers to be constructed since the 1950s. The closing scene from the movie “Rain Man” was filmed at the station, as was a scene from the HBO show “True Detective.”

FLORAL PARK
Floral Park has hosted a home tour every spring since 1993, showcasing more than 200 homes in the area.