Home 2019 Making Magic: A Glimpse of Disneyland at its Beginnings 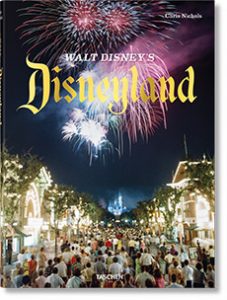 The park created by Walt Disney has become such an integral part of our lives, such a piece of Americana, that we forget those original 160 acres in Anaheim were once just another orange grove. Disneyland, as we know it, could only have happened in the time and place that it did.

During the mid-1950s, America was in the midst of a baby boom, Southern California was an ideal climate for a year-round outdoor attraction, and Los Angeles was teeming with movie artists and engineers who were building new lives in a postwar suburban utopia. More important, it was the place Walt Disney, the world’s most famous film and animation producer, called home. Although many have tried, no park has had the lasting or far-reaching impact of Disneyland. From the very beginning, its themes have been so carefully crafted that it feels like a real place—part idealized past and part conceivable future, tinged with a romanticized exoticism.

The park was the ultimate reflection of Southern California at midcentury, drenched in sunshine and optimism. Disneyland has revealed itself to be a statement of who we are as people, a cultural touchstone, every bit as unifying as Carl Sagan’s Voyager Golden Record or Beethoven’s Fifth Symphony. A place so grounded in the human spirit it becomes magic. —Chris Nichols, “Walt Disney’s Disneyland”