Known for her long-running residencies on the Las Vegas Strip, Rudner has spent many years splitting her time between that city and O.C. But after the pandemic hit pause on live performances, she and husband Martin

Bergman decided to move here full-time this past winter. It’s a natural fit for Rudner, who has deep ties to the county and often performs at the Laguna Playhouse.

“We had our honeymoon at the Ritz-Carlton 33 years ago. My husband is English, and he said, ‘We have to get married because my visa has run out’—because he’s very romantic. So we got married at the courthouse and went to the Ritz, which had just opened. We couldn’t afford an ocean view, but when they found out it was our honeymoon they gave us an ocean-view suite. We always came back to Laguna or Dana Point and said, ‘One day we’ll be able to buy a house here.’ And it only took 30 years.”

Rudner spent much of the pandemic writing a memoir, set to be published later this year. It delves into her long and celebrated career, which began at age 15 when she moved to New York to become a Broadway dancer. “I wouldn’t let my daughter do that, but I had strange circumstances; my mother had passed away, and my father had married somebody who didn’t like me.” At the age of 27, after appearing in shows such as “Promises, Promises,” “The Magic Show,” and “Annie,” she pivoted to stand-up comedy.

“I said, there are so many dancers and actresses who are so good. But I only know two female stand-up comedians. So why don’t I do that? There should be more of us. It took me two years to get five minutes of material, and then I got on the Letterman show. I had the dancing discipline. You know what they say about comedians—it doesn’t matter when you call them, you’ll wake them up. Because they’re notoriously lazy. What I had going for me was I wasn’t lazy. I am now, but I wasn’t then.”

The Las Vegas residency began in 2000 after Rudner and Bergman adopted their daughter. But after more than 1.5 million tickets sold, Rudner says she’s ready for a change. Her tour takes her all over the U.S. and Canada. Many of the shows, including the one this month at Segerstrom Center for the Arts, were originally meant to be double bills with her longtime friend Louie Anderson, who died in January. “I miss him and think about him all the time. He was such a truly talented comedian.”

Fans are as eager for Rudner’s return to the stage as she is. “I didn’t do it for two years! I had always said, comedy is so low maintenance; I have a dress and a notebook and all I need is a microphone. Well, it turns out I need an audience, too. My first show back, right before the New Year’s Eve show at the Laguna Playhouse, was so scary. I forgot the end of a joke. But the audience was with me the whole time because it was the first time they’d been out, too. It felt like we’d just been released from prison.”

“There’s a quote I love: ‘Ride the horse in the direction it’s going.’ It’s an easier ride. My horse always went to Vegas. Now it’s going another way.”

Rudner will perform at Samueli Theater on April 7. For tickets and information, go to scfta.org 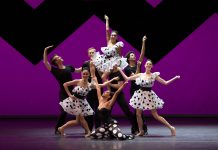