Part fast-paced travel story, part profile of the charismatic chef-owner of Copenhagen’s Noma, Jeff Gordinier’s new book is “The Electric Kool-Aid Acid Test” for a restaurant-obsessed era, with Oaxacan black mole as a consciousness-expanding substance. Gordinier, 52, is the food and drinks editor at Esquire and a former O.C. resident.

A STRUGGLING 20-SOMETHING WRITER
It was that period when a lot of us can’t figure out what to do with our lives. I ended up moving back to Laguna Beach to my parents’ beach house in Three Arch Bay (where they now live full time). I was completely adrift in an incredibly beautiful setting. I had no money, no job prospects. I remember reading Tom Wolfe and Joan Didion books over and over and thinking, “I want to do this kind of writing. I will figure out a way to do this kind of writing if it kills me.” I did finally get a job at the Santa Barbara News-Press. I covered music for them in ’92 and ’93 before I went to New York. 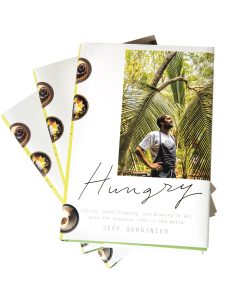 I looked at restaurants the way you would look at a Broadway show—the lighting, the decor, the hospitality approach. I was obsessed with all the different elements. I remember going to Citrus, the Michel Richard restaurant on Melrose that was iconic; the original Spago, up in the hills. But also I was eating at taco trucks and going over to Monterey Park for Chinese food and Taiwanese food, and getting Korean food in Koreatown. It became this channel of engaging with the world, learning about cultures, and opening my mind.

THE BASIS OF REDZEPI’S ACCLAIM
Many people consider Noma to be the greatest restaurant in the world right now. I think that is always debatable. The greatest restaurant might be the taco truck you go to after a day at the beach. What’s not open to debate is that René Redzepi is by far the most influential chef in the world of gastronomy over the past 15 years. All sorts of pathways of cooking—fermentation, foraging, dehydrating food, the way he plates food, the promotion of natural wine—all these things have been wildly influential.

WHAT EATING REDZEPI’S FOOD IS LIKE
I tell people it’s sort of like if there was a color you’ve never seen. Or a note in the musical scale that you’ve never heard before. What he’s doing is finding flavors that you’ve never tasted before through all these foraged greens, through fermentation, through something called “trash cooking,” which is using parts of vegetables and animals and fruits that normally wouldn’t be used in cooking but can be delicious if rendered a certain way. You eat things that are so delicious you can’t believe it.