What is Project La Femme?
We’re a group of friends (my co-founders are Amber Scott and Andrea Freeman) who create art and promote other artists in the community, with a focus on women’s voices and marginalized voices. We met years ago doing a play I directed called “Desdemona, a Play About a Handkerchief” by Paula Vogel. After the 2017 Women’s March, we felt really inspired to channel that positivity into creating art.

What sorts of projects have you done?
The first one was called “I’m Not Disposable”—we got a space at the Magoski Arts Colony during the Fullerton Art Walk, and we asked people to write out what they thought they were worth. This was right after Heather Heyer was killed in Charlottesville, and there was talk afterward of her being a single woman with no children and therefore it was not a big loss. We wanted to offer people a reminder of their worth.

How did you connect with the Curtis Theatre?
An actor we had worked with approached us about it because the Curtis was planning its 40th season. Although they usually do a lot of touring shows, they wanted to be more active in producing art locally by having a playwrights festival.

Tell us about Page to Stage.
We received almost 400 submissions and selected five to be performed in staged readings. We hope to present these top scripts—all by women, who are incredibly underproduced in regional theater—to the people who plan a season (of theater) and say, here is the talent that is available locally. It’s not in New York. It’s right here. 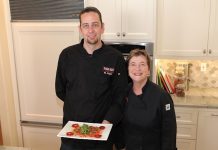