Home 2019 Drawn Together: O.C. Illustrator Bids Adieu to Fancy Nancy and Greets a...

Artist Robin Preiss Glasser of San Juan Capistrano had wrapped up her mega-bestselling picture book series when she met celebrated “Bel Canto” author Ann Patchett last year. The meeting sparked the first children’s book by Patchett, “Lambslide.” It’s about a pack of lambs who hear the word “landslide,” mistakenly think that they’re getting a “lambslide,” and then campaign to get one. Here’s what Glasser and Patchett say about their creative partnership.

How they met
Glasser: A year and a half ago, after 15 years of doing 80 “Fancy Nancy” books, I was on my last book tour in Nashville—as I’ve been many times, many years in a row—and Ann was never at the bookstore she co-owns, but there she was. And we got talking; we hit it off.
Patchett: So Robin comes in, she says, “Here I am with ‘Fancy Nancy: Oodles of Kittens.’ ” The best title in the world, “Oodles of Kittens.” She says, “Fancy Nancy is over, would you write a children’s book for me?” I said, “No, I don’t know how to write children’s books.” And, in my memory, Robin said, “Let’s sit down, and I’ll show you how to do this.” 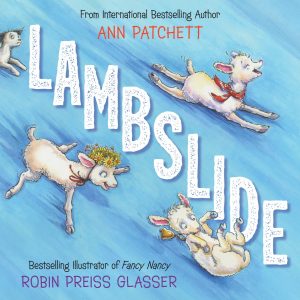 The inspiration for “Lambslide”
Patchett: The origin story of the book is that Conor Lamb won the 17th congressional district in Pennsylvania and there was a picture in The New York Times. It was at the rally after he won and someone was holding a sign that said “Lambslide,” and I said to my husband, “I have to go upstairs for a while. I have to write a children’s book.”
Glasser: You have to be brilliant and have practiced writing for 55 years to be able to write a picture book in an evening. Nobody else can do it. I promise.

Their complementary talents
Patchett: When I write a novel, I have to say, Nicolette is the main character. She has short red curly hair. She wears a red-and-yellow checked jumpsuit and little yellow cowboy boots. She’s this tall. All this description. For the children’s book, I’m like: Nicolette Farmer. Period. Three lambs. Period. (Robin) does all the heavy lifting. She can differentiate three lambs. That’s what everybody keeps saying: The lambs have so much personality. The pigs have their own thing. The goat has his own thing. I don’t have to do any of that. That’s just Robin.
Glasser: She has to get the whole story, which I can’t do for the life of me. If I could, I would be doing it. We are like the other half of each other’s yin and yang.