After publishing more than a dozen volumes of contemporary women’s fiction, Dana Point author Anita Hughes dives into the past in her latest novel, “The Light After the War,” inspired by the true story of her mother and her mother’s best friend, a young Jewish Hungarian women who survived the Holocaust by jumping from the train carrying them to Auschwitz. After the war, the friends traveled together to Italy, New York, and Venezuela to build new lives.

Tackling the tale
I started thinking about this maybe six or seven years ago. But I thought, “It’s too different from what I write.” My mother died of Alzheimer’s about the same time. I just kind of put it aside. My husband died three years ago, and it made me want to write something deeper. So (it was) the two things together. I published it as Anita Abriel, my maiden name. It is the story of my mother, and I felt that I would feel closer to her that way. 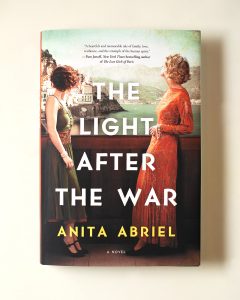 Growing up with family stories about WWII
I grew up in Sydney, Australia. My Hungarian grandparents lived with us, and they all spoke Hungarian to each other. I think it sunk in because my grandmother’s siblings—the ones who survived—they all lived nearby, and we would go to their homes, these little old Hungarians, and they would all eat Hungarian food, exactly as I describe. They all had stories about the war. I think it was just important to pass that on. And it was interesting. Ever since I was 8, I wanted to be a writer, so I was taking it all in, filing it away.

Staying true to the facts while allowing for creative freedom
I kept all the names the same—my mother’s name, (her friend) Edith’s name, my grandparents—because it felt real to me. My mother spoke seven languages. Her father was a lawyer. So she was very intellectual. Edith loved fashion. That’s what my mother would talk about when she talked about Edith. I think one of my favorite parts of the book is when Edith falls in love with someone, and he’s not just a pretty face. She thinks (he is handsome) because she’s in love with him, but he looks like a toad. I really like that because that’s what love is. It’s not about looks; it’s about the person.

Historical fiction’s resonance
I sent the book to my best friend who’s been my best friend since we were 16. I said, “This truly could be us” because friendship, especially female friendship, is timeless. What we experience is different, but so many of the feelings are the same. A lot of our struggles are the same. We all want love, safety, family, and I think none of those things change. And I’ve lived in different places and been a foreigner in many places. So I know that wanting to belong is very important and accepting people (from different cultures) is, too.