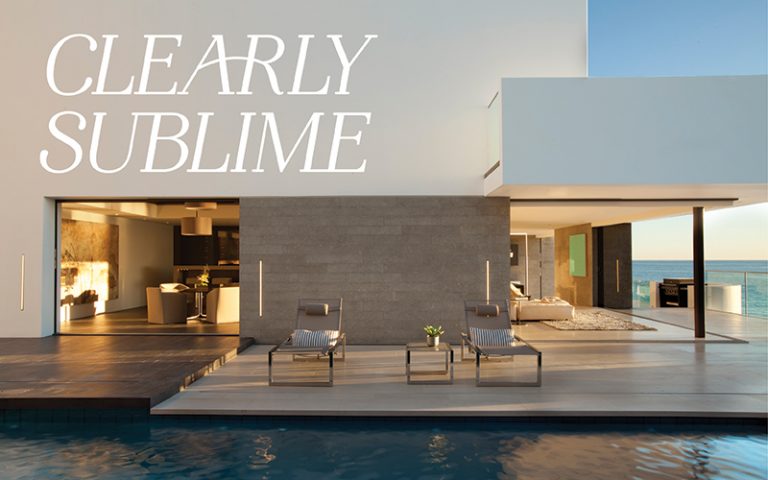 A typical California beach house conjures quaint images—weathered bungalows strewn with bougainvillea and
decorated with secondhand furnishings. But for one high-powered Colorado couple, who like spending winters in West Coast sunshine, an uber-modern coastal home with all the amenities of a resort was more their style. To fulfill their dream, they called in the Laguna Beach husband-wife design duo of Horst and Arianna Noppenberger of Horst Architects, and Aria Design, respectively.

Horst, who remodeled the four-level home perched on a craggy promontory in Laguna Beach in the ’80s, describes it as a Richard Meier-esque stucco-and-glass dwelling with steps leading 40 feet down to a secluded cove. But decades later, it needed another major facelift. The owners purchased it in 2009 and began an extensive, two-year remodel.

They kept the basic footprint of the 6,500-square-foot home, taking it to the studs and reconfiguring spaces to open the maze of rooms into a spacious four-bedroom, four-and-a-half-bath home. Today a master bedroom on the lower floor and a pair of guest rooms on the top story sandwich the lofty, adjacent living and dining room, and combo kitchen and-family area. To take advantage of California’s temperate climate, expanses of floor-to-ceiling windows and concealed pocket

doors now wrap the ocean-front and sides of the house, expanding the residence to spacious terraces where seagulls soar overhead and waves crash on the beach below. A continuity of materials inside and out—including Buxiel Portuguese limestones, brushed oak, and porcelain tiles—further dissolve the boundary between interior and exterior. “We took the opportunity to create a stronger connection to the outdoors,” Horst says, “so that nearly every interior space now has a view of the ocean.”

Arianna says the soothing palette of sand, pebble gray, and bleached coral, inspired by the site, makes it feel even more like a retreat. The Italian-born-and-educated interior designer says her job starts where her husband’s leaves off. She tended to the home’s stunning appointments, a mix of Eurostyle modern and her own custom furnishings.

Surfaces throughout the minimalist residence are highly tactile, organic, and downright sensuous. Suede covers the seating in the family room and wraps the master platform bed, while cut-felt and fleecy area rugs soften the oiled oak floors. Perforated, melted-aluminum panels in the powder room recall “how light looks filtering through kelp beds when you swim underwater,” says Arianna, who alludes to the sea in other accessories and art throughout the house.

Amenities are designed to address the clients’ wishes for a comfortable vacation home to entertain family and close friends: a detached guest house, a swimming pool and gym, fire pits and spas, and a state-of-the art Boffi kitchen with a built-in espresso machine. It’s no wonder the well-traveled clients feel as if they’re staying in a resort.

“There’s not a home anywhere in the world I would trade for it, from Amalfi to Greece,” says the owner.  “No place.”