The Winery Restaurant & Wine Bar
This Sunday marks the start of brunch service at the Tustin location. From 11:30 a.m. to 2:30 p.m., indulge in items such as lemon ricotta pancakes, crab and egg white frittata, a vegan mushroom and lentil ragout, and a Zinfandel braised beef short rib omelette. thewinerytustin.com

The Row on Harbor
This dining and retail plaza in La Habra recently relaunched to include restaurants such as Akafuji and Furai Chicken (opening this month) as well as Beauteous Nails and The Office, a co-working space. An extensive outdoor seating area is a prime feature. therowonharbor.com

Brunch Social
In May, join in on this month-long event presented by the Orange County Restaurant Association where participating restaurants will offer special cocktails and signature dishes. ocrestaurantassociation.org

Bird Talk
This vendor is the latest to join the robust lineup at SteelCraft Garden Grove. Menu highlights include a variety of fried chicken sandwiches, jumbo chicken tenders, wings, and sides such as loaded tots and buttermilk waffles. birdtalkchicken.com

Sushi Ii
The Newport Beach restaurant known for its Kansai-style pressed sushi welcomed the return of indoor dining with new omakase options as well as upgrades to takeout offerings. sushi-ii.com

Blu SkyBar
Located on the 12th floor of Radisson Blu Anaheim, this rooftop restaurant and bar features Spanish-inspired cuisine by executive chef Edgar Beas. Start your meal with tapas such as patatas bravas, a crispy potato dish, and work your way through entrees including a 40-ounce dry-aged bone-in ribeye and a signature squid ink rice with scarlet prawn and chorizo picante. The cocktail and beverage program is also influenced by Spanish flavors with a curated selection of Spanish beers and wines. radissonbluskybar.com

Bayside Restaurant
On April 13, dine at this waterfront restaurant and enjoy a live performance from grammy-award winning musician Tom Scott and his quintet. 5 p.m. to 8:30 p.m. Purchase your tickets in advance at baysiderestaurant.com.

Ramen & Tsukemen Tao
The second O.C. location of this ramen restaurant opens April 12 in Orange with a larger dining space, vegetarian options, and a wider variety of appetizers and other dishes. Try the signature miso broth and the new chicken broth. instagram.com/ramen_and_tsukemen_tao/

Oi Asian Fusion
Head to Rodeo 39 Public Market today in Stanton and grab any of Oi Asian Fusion’s desserts. The eatery will be donating 100 percent of proceeds to OCAPICA, a local nonprofit raising funds to provide the local AAPI community with much-needed resources. oiasianfusion.com 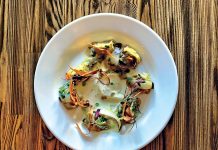 A Better Bacchus in Irvine 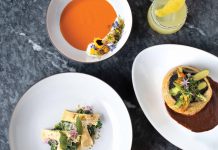 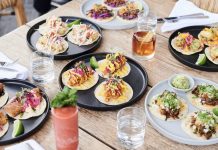