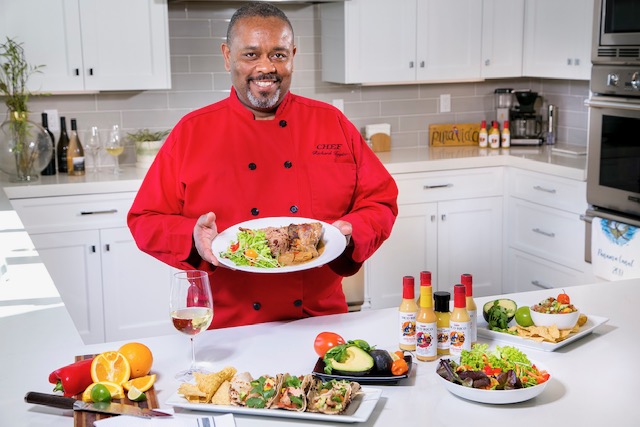 How did your culinary career get started?
I grew up with my grandmother in Costa Rica so I learned how to cook from her when I was 5 years old. I’ve always cooked but never took it as a career until I was laid off in 1999 from a company I was working for. They offered me an opportunity to go to school and they told me I could do culinary arts.

When did you start making hot sauce?
I used to work as the executive chef at a golf club in Chicago. One day, I decided to bring some habanero peppers with me from home and I threw them in the blender and started throwing stuff in there, tasting it and blending it up. Next thing you know, Tico Rico is born.

Where did the name Tico Rico come from?
They call Costa Ricans Ticos. Rico means rich. It’s my name and it also means flavorful. It’s a play on words.

You also have the saying Pura Vida on your bottles. What does that mean?
In Costa Rica, it’s a term of endearment. Anybody that goes to Costa Rica knows the term because that’s what we do. Costa Ricans are very friendly people. Whatever you do, make sure it’s on your bucket list because it’s a beautiful place.

Did you have any other mentors growing up?
My grandmother’s best friend took over and helped my mother, who was the eldest of eight children, raise seven other kids after my grandmother passed away from childbirth. I learned to cook from her. She cooked a lot of Caribbean stuff.

Tell us about some of your hot sauce flavors.
The habanero is spicy, but it’s very flavorful. I love hot stuff, but it can’t burn me for no good reason. It has to have some flavor. The serrano lime is really tasty. It’s less heat, but has a lot of flavor. It’s very refreshing and goes well with seafood. The acidity freshens it up a little bit. The seasonal trio is really hot and has Carolina Reaper, the hottest pepper in the world; ghost, which is the second hottest; and habanero. We only have it seasonally because I grow my own Reapers and my ghosts.