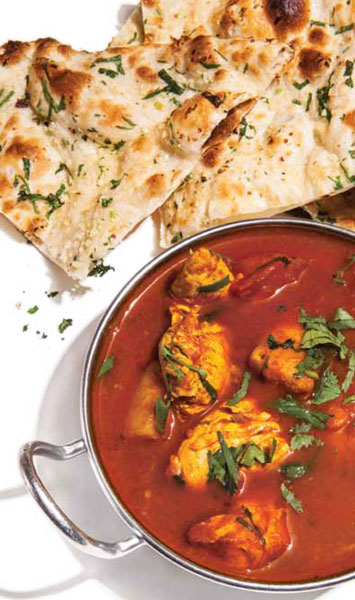 India’s smallest state, Goa, is the birthplace of vindaloo. The dish is a beguiling mix of tangy, sweet, and spicy, and traditionally is made with pork steeped in vinegar, garlic, ginger, chilies, coriander, cumin, onions, mustard oil, and tamarind. Reinterpreted by the English, it has become one of the most fiery dishes on the menu at your favorite local Indian restaurant. Today, it’s typically made with the Western addition of potatoes and chicken, shrimp, or lamb instead of pork.

At Saagar Fine Indian Cuisine, the chicken vindaloo, left, arrives in a small metal tureen with impossibly tender pieces of boneless white meat swimming in a deep terra-cotta-red stew amid perfectly cooked potatoes and tomatoes. Servers spoon the piping-hot mixture over fluffy basmati rice, meant to be sopped up with blistered garlic naan. The dish packs the intense heat it’s renowned for, a belly-warming feast that has you dabbing at the beads of perspiration across your brow.

Natraj’s vindaloo is served with chunks of succulent, fall-apart white- and dark-meat chicken, or lean lamb and potato wedges. There’s a lingering, buttery sweetness to offset the spiciness. The dish begs for a side of crisp and chewy wedges of paratha, the popular unleavened whole-wheat flatbread known for its layers of cooked dough. It’s a lovely and satisfying alternative to the usual naan.

For a vindaloo that’s more subtle and delicate, Traditions offers four varieties: dark-meat chicken, fish, shrimp, and lamb. You can taste the depth of spices, and the manageable heat level won’t leave you gasping for air. Go for the fish vindaloo—the fillets of white fish become the perfect sponges to soak up all those big flavors.