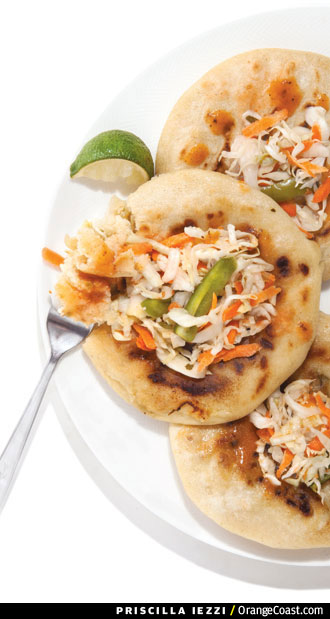 It’s no wonder pupusas are El Salvador’s chief culinary export. One bite of these griddled discs of masa all but bursting with cheese, meat, or vegetables and you instantly forget any inane comparison to quesadillas or gorditas. Before you know it, you’ve assembled a short stack, topped it off with a drizzle of mild tomato salsa and a heap of curtido (a lightly pickled cabbage slaw), and devoured it all without taking a breath.

Pupuseria San Sivar makes what might be Orange County’s finest. There are two varieties: the traditional masa-based that is both delicate and hearty, and, for a few cents more, the comparatively rare rice flour-based that’s so light you could consume half a dozen. At San Sivar, any pupusa can be made with rice flour. Try the excellent chicken and cheese, or shrimp and cheese. As for salsas, there’s the ubiquitous tomato-based, and the hotter, smokier variety. But no bite is complete without the crunch of curtido.

El Chinaco, a cheery, colorful place that splits its kitchen between Salvadoran and Mexican cooking, is where much of the county tasted its first pupusa. They’re stuffed with all the usual ingredients: pork that’s been cooked until it could be carved with even the dullest knife, and cubes of squash suspended in a mass of molten cheese. Once you’ve made it through the basics, order one packed with cheese and loroco, the edible buds of a Central American vine that tastes like a cross between leafy greens and fresh asparagus.

Un Rincon Centro Americano isn’t nearly as well-tread. The restaurant is about as no-frills as it gets, but that, of course, is secondary to its excellent pupusas. Each is griddled to greaseless perfection, the masa marked with blackened patterns of char that look like a Rorschach test. Even the simple cheese variety is a crowd pleaser.