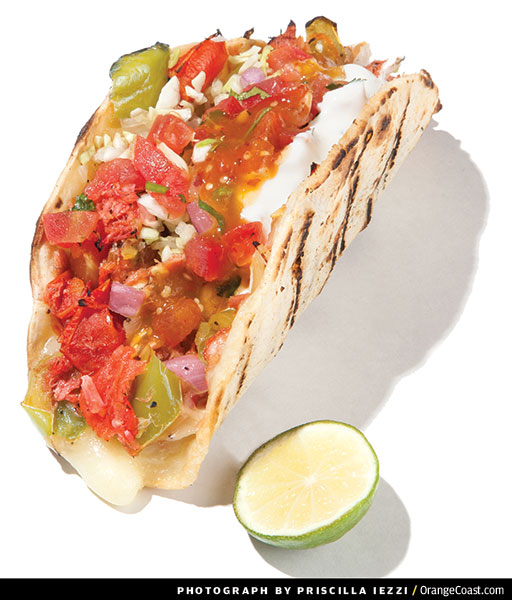 Try to imagine the quintessential fish taco and there’s a good chance you’ll immediately dream of Baja. The two are intimately connected, but the fish taco is one of the fundamental foods of all of coastal Mexico,
as beloved by sun-bleached surfers
as they are by those who grew up
on Sinaloa’s shores.

At Mariscos Mocorito, you don’t need a stunning ocean view or even a mild beach breeze—the restaurant is purely of the sea. Crisp tostadas are loaded with ceviche, and soups are swimming with all manner of shellfish. This restaurant is dedicated to the seafood of the Mexican state of Sinaloa, so what you really want are the smoked marlin tacos. They’re magnificent: gently charred tortillas stuffed with diced roasted peppers, fresh pico de gallo, gooey cheese, and sizable hunks of rosy smoked marlin. They’re nothing like the prototypical Baja-style fish tacos, but that’s precisely what makes them so good.

Los Cotija’s is the kind of place you could drive by a hundred times without stopping. But once you try its fish tacos, you’ll never again ignore its charms. There’s nothing particularly fancy or flashy about these tacos, just a heap of shredded cabbage, a streak of cool crema, and fish fried to a reverberating crunch. Start with a taco or two and, before you know it, you’ll be ready for three, four, and five.

Slapfish is a fish taco force, the truck-turned-restaurant producing some of the freshest and finest around. Here, it’s all about the fish, sustainably sourced and cooked about as perfectly as possible. Ask for the grilled fish taco with “awesome sauce,” a huge, blackened fillet dressed with chile-spiked crema. They’re messy, but these are the tacos you want to be handed at the beach, with a cool drink in your other hand.

Photograph by Priscilla Iezzi
This article originally appeared in the July 2014 issue.