From tried-and-true egg combos and fluffy pancakes to healthy smoothies, acai bowls, and quick-grab burritos, there’s a breakfast out there for every taste and time frame. Here are 25 spots across the county where you can start your day right.

Plums Café
Costa Mesa
Every breakfast menu worth its salt features eggs served scrambled, sunny, and maybe poached. But what about shirred? This preparation of eggs baked with cream and Parmesan cheese is far less known. At Plums Café, the indulgent entree is served in a still-hot cast-iron skillet, eggs sitting atop a crusty baguette that transforms into a cushion of flavor as the cream seeps in. Spinach and tomato bits cut the richness, while sliced potatoes dusted with parsley and hints of rosemary are equally scrumptious. 369 E. 17th St., 949-722-7586

The Ramos House Café
San Juan Capistrano
Eating breakfast on the deck of this historic structure is quite the experience. Eggs get extraordinary treatment, with a greater variety of offerings than the compact menu would suggest. Fried poached eggs make a rare appearance, as do small but flavorful Scotch quail eggs. You can’t go wrong with Bubble and Squeak, a dish of scrambled eggs, crispy bacon bits, tomatoes, and a fried potato and cabbage cake. 31752 Los Rios St., 949-443-1342

Early Bird
Fullerton
In the seven years since its opening, Early Bird has amassed a following, meaning there are regularly lines out the door. Thank dishes reliant on local ingredients, with eggs playing a starring role. Favorites include creative twists on eggs Benedict, and omelets such as the John Wayne with sausage, peppers, and mozzarella cheese. If you’re a fan of sunny side up, try the duck confit hash, which also packs unctuous shreds of meat mingling with fingerling potatoes, raisins, and onions. 1000B E. Bastanchury Road, 714-529-4100

The Hangout
Seal Beach
The epitome of beach casual, The Hangout serves a surprisingly strong roster of omelets a stone’s throw from the pier. Despite its unpretentious nature, the restaurant offers specials such as a whole lobster tail omelet. If it’s stick-to-the-ribs food you’re craving, load up with the fried chicken Benny that also includes poached eggs slathered in gravy. 901 Ocean Ave., 562-431-4888

Breakfast Republic
Irvine
Tucked in a prime spot in University Center, this newcomer presents options filled with fun and flavor. Eggs any way you want them unite everything from breakfast renditions of tostadas and jambalaya to hot dogs and a signature dish of shrimp and grits. Other choices include a morning take on mac ‘n’ cheese and a mashed-potato omelet. 4213 Campus Drive, 949-379-7177

Break of Dawn
Laguna Hills
Chef-owner Dee Nguyen’s culinary pearl is in strip-mall suburbia. Simple items such as “potato skillet” and “smoked salmon” belie complex, beautifully presented dishes. Many feature some of the best poached eggs you’ll ever eat, and others include ingredients ranging from wild boar blood sausage to scallops. Tempura-battered eggs are another specialty you’d be hard-pressed to find elsewhere. 24291 Avenida De La Carlota, 949-587-9418 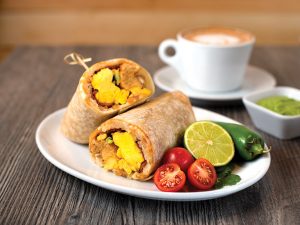 Nate’s Korner
Santa Ana
Nate’s has been serving its modestly priced and well-portioned breakfasts for more than 25 years. Hot tickets here are breakfast burritos that are a cut above because of the hash browns. In addition to the expected blend of fried eggs, cheese, and meat choices that include pastrami, the burritos boast the most wonderfully crispy shredded potatoes around. 3960 S. Main St., 714-545-5772

Nick’s Deli
Seal Beach
When you’re craving a quick but satisfying breakfast in Seal Beach, follow the locals to Nick’s. This Main Street staple is perfect if you want a breakfast burrito that will fill you for hours on end. The ones slung from this walk-up, beach-casual spot are massive, stuffed with eggs, rustic potatoes, and meats ranging from chorizo to Italian sausage. Breakfast is served all day, but bring your greenbacks; Nick’s is cash only. 223 Main St., 562-598-5072 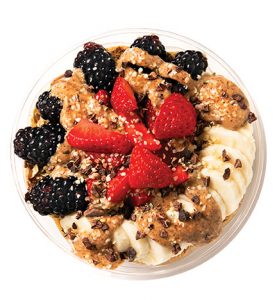 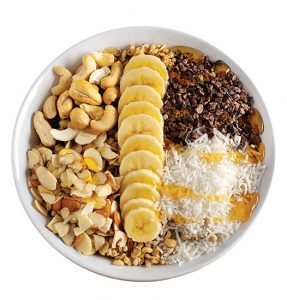 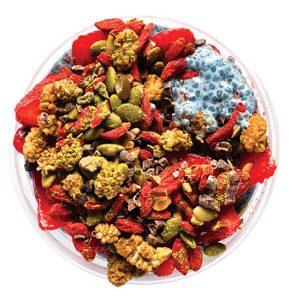 Build Your Own bowl (vegan) 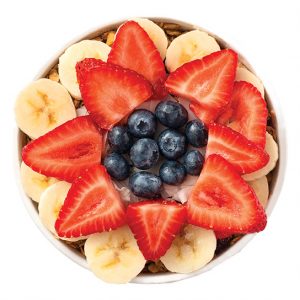 Snooze, an A.M. Eatery
Orange and Tustin
This Colorado-based chain opened its first O.C. outpost in Tustin in 2016 and launched its Orange location earlier this year. Offerings range from breakfast-centric takes on tacos and potpies to frittatas, pancakes, and hash. Customization is highly encouraged. In addition to a variety of juices, Snooze offers a full bar with morning cocktails. Enjoy breakfast every day until 2:30 p.m.

Mama’s on 39
Huntington Beach, Los Alamitos, and Newport Beach
It’s easy to feel at home at Mama’s on 39, whose name is an ode to the comfort food inspired by a mother’s cooking and the restaurant’s location on Beach Boulevard, aka State Route 39. Two additional spots in Newport Beach and Los Alamitos have joined the original one in Huntington Beach, and all offer a strong breakfast menu served all day. Chicken and waffles are among the most popular items on a roster that ranges from granola pancakes and an “old-fashioned” Benedict to a breakfast pizza.

Harbor House Cafe
Dana Point and sunset beach
If you’re driving down PCH at midnight and craving a classic diner breakfast, head to Harbor House. Whether you opt for the original spot in Sunset Beach—established in 1939—or the Dana Point locale that opened in the 1940s, you can grab breakfast 24 hours a day, every day of the year. Indeed, the only breakfast staple with limitations is the oatmeal, which wraps at 3 p.m. We’re partial to the omelets, smothered in cheese and served with sides such as tortillas, rice, or home fries. The fare is filling if not fancy, but at 3 a.m., isn’t that the point?

Anepalco
Orange
Chef-owner Daniel Godinez’s small shop dishes out some of Orange County’s best chilaquiles. Beautiful presentation mirrors astounding taste. No mere plate of breakfast nachos, the chilaquiles arrive as a thick cylinder, bound by red or green sauce. Rojos are the favorite, and it’s easy to taste why. The red sauce is made from a secret blend of dried chiles and is orbited by specks of cotija cheese. A sheet of eggs, avocado mousse, and cream top this Mexican masterpiece. 415 S. Main St., 714-771-2333

Moulin
multiple locations
French pastries that appear almost too pretty to eat sit proudly behind glass, along with other on-the-go items such as paninis and salads. The kitchen busily whips up crepes dusted with powdered sugar, thick slices of orange-scented French toast, and perfect omelets. Moulin’s casual yet authentic take on French fare seems to be working, with the bistro set to expand to six locations throughout Orange County by early next year.

Outpost Kitchen
Costa Mesa
Shoehorned between industrial shops, this eatery serves organic, Australian-inspired fare that ranges from meat-and-egg-intensive entrees to smoothies and granola. Outpost’s specialties include house-smoked salmon and a breakfast sandwich with fried egg, prosciutto, and baby spinach. Order at the counter, grab a seat at a high communal table, and enjoy the action emanating from the open kitchen. 1792 Monrovia Ave.,
949-873-5123

85 Degrees C
multiple locations
Since its first U.S. shop opened in Irvine a decade ago, this Taiwanese bakery has become the “it” place for a grand selection of grab-and-go pastries and drinkable treats. Choices range from Japanese-style matcha buns to French rolls and the chain’s famous loaf of milk bread. Liquid treats such as smoothies or signature sea salt-infused coffees or teas are equally delicious.

@zoe.rosie Rialto in Downtown Fullerton! Favorite cozy and casual sidewalk brunch. The kindest, chillest staff and the best breakfast potatoes around.

@kat.deangelis Cafe & Te in Fountain Valley – it’s a totally hidden GEM with Euro-Viet breakfasts – I get the fried eggs with pate, saucisson sec, cornichon, French ham and warm baguettes!!! French toast is made with baguettes as well.

@slammed_sammy Bonjour Cafe Dana point has the best French toast I’ve ever had!

@katiewilke Old Vine Kitchen + Bar at the camp in Costa Mesa bomb omelettes, biscuits and gravy… they even have scrapple

@adamorozco Cowgirls Cafe in Santa Ana! Homemade classics with no frills!

@simplyseasideorganizing @zebrahousecoffee in San Clemente. Their gluten free muffins and lattes are delicious!

@jarmfield7 @orangeinncafe in Laguna Beach, great food and even better service

@socalfan63 Sugar Shack in HB. Great atmosphere and food. Haven’t had a bad meal there yet. Plus you can hang at the beach after you eat

@gracieforyou @cremacafe their chorizo Benedict and house-made pastries are out of this world.