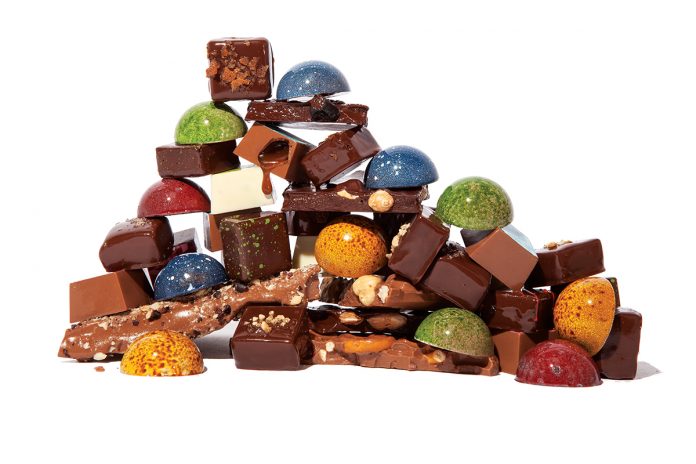 Richard Foley’s career has revolved around chocolate since he was the “forklift” for his father’s small cocao distribution company run from the family basement in Vancouver, Canada. At 21, he founded Qzina, which distributed chocolate to the world’s most discerning chefs, and grew to become the largest business of its kind in North America. Three years ago, his company opened an Irvine test kitchen and training facility. Now, Foley has sold his 30-year distributorship, and is having a Willy Wonka moment making and selling his own bean-to-bar chocolate at his ChocXO factory. And did we mention his two new coffee and cocao cafes?

What’s a bean-to-bar chocolate factory?
We make liquid chocolate starting with the bean. Many of the best-known brands purchase chocolate from bean-to-bar makers. The method has become increasingly popular with the artisan food movement, but making chocolate with state-of-the-art factory equipment is rare because of the significant investment. Yet without it, you can’t control variables such as acidity and humidity, and you can’t consistently create the luxurious mouth-feel that world-class chocolate delivers.

Sounds like a chocolate-lover’s paradise.
I’ve always dreamed of doing this. Having sold almost every quality, type, and brand, now it’s my turn to prove that world-class chocolate can be made in America.

Did an a-ha moment lead to this?
After selling Qzina in 2013, I did nothing for three months, and quite simply got bored. The company that bought Qzina didn’t want the Irvine space, so I said, “I’m going to make chocolate there.”

Tell us about your factory tours.
I want to show how chocolate is made in a state-of-the-art factory. There’s a new wave of artisan chocolate-makers using a stone mill. They believe that a stone melanger is a better process.

What do you think?
Generations of Swiss, French, and Germans have continually raised the bar to make the process better and better. So to me, going back to a stone mill is lowering the bar again. I had to evaluate everything chocolate and cocoa in the world for decades, so how could I turn my back on all that I’ve learned about quality? No, it’s burned into me. It’s my hard drive.

Tell us about your ChocXO Coffee and Cacao cafes in Lake Forest and Costa Mesa.
We combine coffee and chocolate beans using the same approach: sourcing the highest-quality beans from the best growing regions in the world and craft-roasting them to their fullest potential. Both are grown within 20 degrees north and south of the equator, and if you’ve tasted our mocha made with our locally roasted espresso beans, combined with the liquid chocolate we make in our factory, you know what I mean.

How did your family end up in Dana Point?
We’d been living in Florida, and one summer we rented a house here, and then another summer, and then another. We finally just decided to move here.

Tell us something we wouldn’t know about chocolate?
Thank the monkeys for it. They take the fruit off the tree, crack it open,
eat the pulp, and spit out the seeds. They travel all over South America doing this, spreading the seeds and growing trees everywhere.

What’s next for ChocXO?
I want to resist my ridiculous urge to grow. I want to create a medium-size operation, I want to be the boutique best, and be one with the bean.  I didn’t start ChocXO to hit a home run; I started this because I really just want to make chocolate.