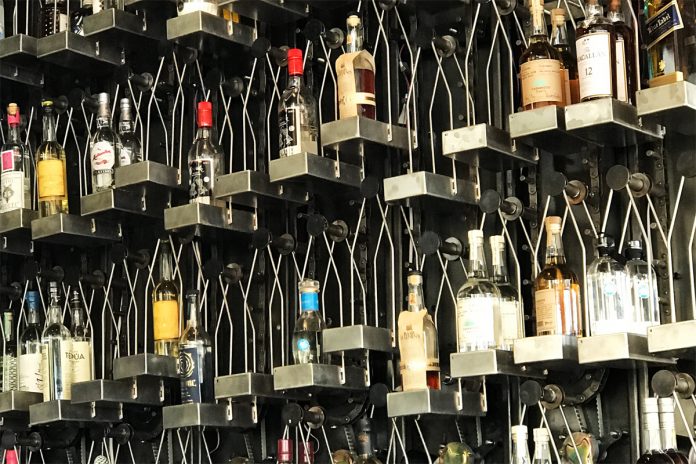 The highly anticipated opening of Puesto Park Place in Irvine kicked off a few weeks ago along with an incredible grand opening event that Orange Coast had the pleasure of hosting. Braving the crowds and long line of attendees, the anticipation to see the new Puesto was only heightened that much more. Entering into the main dining area we were welcomed by a space that felt intimate and warm yet captured a sense of openness and grandeur at the same time. As if the conceptually inspired interior space wasn’t impressive enough, we were all blown away when we saw the moving bottles of alcohol behind the bar.

No doubt this is one of the most unique bars you’ll find in Orange County right now. A motorized carousel made out of metal rotates the bottles of liquor in a vertical fashion. Each row moves up and down so that the mixologist/bartender can easily retrieve a desired spirit with a simple push of a button. The entire wall fabrication was designed by Basile Studio and when put in movement makes for a synchronous and awe-inspiring sight. Stop by the new Puesto Park Place in Irvine to check it out!

The Liquor Carousel at Puesto Park Place was inspired by equipment found in mining operations for the removal of rock from a mine shaft, typically in baskets or carts. It uses industrial sprockets and chains, which are very commonly used in industrial and agricultural facilities.  The system is made out of steel.

Additionally we custom programmed the electronics in-house to allow the bartenders to select which basket they want – 1 through 8.  The baskets can be programmed remotely via WIFI to animate to any configuration.

Also the Liquor Carousel was a solution to a problem we encounter often – bars that are making craft cocktails need more room for a larger variety of bottles than your average bar.  We often have to make ladders to allow bartenders to maximize use of the vertical space, but those tend to get in the way of the bartender.  The idea here was to get rid of the ladder to open up floor space and have the Carousel do the work.

The system is unitized for ease of install allowing us to utilize one or 100 in a row.

Some information about the designer and the studio that created the liquor carousel at Puesto.

About Paul Basile: Designer, fabricator, general contractor, and artist, Paul Basile is the renowned Southern California founder of BASILE Studio, a commercial, hospitality, and retail design firm known for its exhaustive attention to detailed craftsmanship. Each and every custom element at BASILE is constructed in-house – eliminating the need for outsourcing. His projects have earned wide-ranging critical acclaim including accolades from the American Institute of Architects, San Diego Architectural Foundation, and Hospitality Design Magazine. Paul’s work has been featured in The New York Times, Inc. Magazine, Wall Street Journal, California Interiors, and more. The Detroit native is a fourth-generation builder who started his career with a line of handcrafted furniture in the early 90s. The doors to BASILE Studio opened in 1994, evolving into a full-service design, build, and fabrication studio in 2008. In 2016 he opened his second art gallery, basileIE, and in 2017 he launched a furniture collection, BASILE Built. Looking ahead, Basile has plans to utilize his years of expertise coupled with his intrinsic sense of structures, space and style for several commercial development projects in 2018 and beyond.