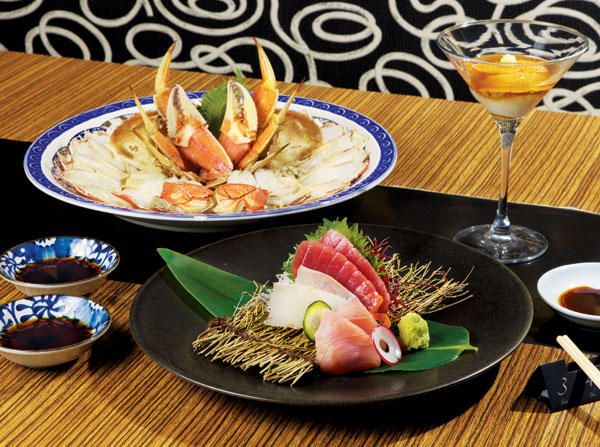 So you’ve graduated beyond the rudimentary rolls and may have tried still-wriggling live sweet shrimp or luxurious uni (sea urchin), the foie gras of the sea. Congratulations, you’re ready to broaden your sushi repertoire. Time to try omakase, which means “trust me” in Japanese, hardly a new concept but one that more places are offering. Sit at the bar, say the magic word (oh-ma-kah-say) and let your itamae, or chef, deliver off-menu treats reserved for such an occasion. Here are six places in O.C. where you can get the omakase experience.

1. San Shi Go
Behind the twinkling eyes and an easy smile, Daisuke, or “Dice” as the chef is known by steadfast regulars, is all business when it comes to preparing exquisite sushi, above, with artful precision. He’s adamant about having fresh fish flown in from Japan, from kasugo-dai, lean and tender baby red snapper, to kan-buri, melt-in-your-mouth wild yellowtail that’s “the top of the top” in Japan. Daisuke and his chefs, Shogo and Makoto, believe that absolute respect is due every customer and, when it comes to omakase, that respect comes in the form of supple octopus, slow-cooked in green tea with a kiss of sea salt, and yuzukosho, or velvety, seared toro (tuna belly) with a delicate stain of soy sauce and whisper of truffle oil. And if you receive a piece of the lightly charred engawa (halibut fin), you know you’ve achieved VIP status. Starts at $70 per person. 205 Main St., Newport Beach, 949-673-3724

2. Sushi Shibucho
Tucked in an unassuming strip mall is one of Orange County’s purest culinary gems, an enduring beacon of authority when it comes to authentic, no-frills sushi. For more than a decade, chef Sakae Shibutani has offered nary a smile as he barks commands and places sublime cuts of fish on patrons’ dishes: “No soy sauce.” You must obey. Enjoy pristine red snapper presented several ways—one unadorned, another with a dab of potent yuzokosho, or citrus chili paste, and a drop or two of ponzu, or citrus soy sauce. Or better yet, tai konbujime, snapper cured in kelp. Then there’s skin-on Spanish mackerel—tangy, briny, crowned with grated ginger and scallions—or the anago (sea eel) sprinkled with salt, straightforward but memorable. If you’re lucky, you’ll receive the ultimate in sushi comfort: a still-warm, buttery piece of ginger-and-soy-marinated tuna atop a bullet of rice. Starts at $40 per person. 590 W. 19th St., Costa Mesa, 949-642-2677

3. Hamamori
The gleaming, white environs of James Hamamori’s sleek sushi oasis boasts a sumptuous omakase selection where each piece is like a jewel: from chu-toro, a medium-fatty tuna painted with a glistening coat of light soy sauce, to madai, a red sea bream finely dusted with a blend of Himalayan and shiso salt, to unagi, freshwater eel scored, grilled, and flecked with grated orange zest. Other possible courses include spicy tuna enveloped in a silky, steamed dumpling and topped with vibrant scallions, as well as tender octopus nearly hidden under shards of Parmesan. It goes without saying that the uni remains a luscious must-order. Starts at $35 per person for lunch, $40 per person for dinner. 3333 Bear St., Costa Mesa, 714-850-0880, hamamorisushibar.com

4. Ikko
This place has a cult following for its avant-garde “freestyle” sushi, where chef Ikko Kobayashi deftly composes an array of Japanese fare not typically served elsewhere. A duo of beautifully scored toro can start the omakase on a rich note, followed by a firm sliver of mild bonito with a lone dot of grated ginger. The standouts: blue-barred rock cod with fresh shaved black truffle, delicately torched Kobe beef with a crisp garlic chip, and the seared and wonderfully salty Iberico pork sushi that practically dissolves on your tongue. Starts at $60 per person. 735 Baker St., Costa Mesa, 714-556-7822

5. Bluefin
No stranger to the O.C. sushi scene, veteran chef Takashi Abe’s coastal retreat continues to yield the best omakase lunch deal around. His creations are stunning works of edible art. Petals of bluefin tuna, salmon, and white fish are coiled into a pretty bouquet of sashimi roses; sardine carpaccio is bathed in a bright green oil with a streak of acidity; and a modest slab of grilled seabass rests in a beautifully murky pool of kaleidoscopic seaweed bits. Abe doesn’t skimp on offering other seasonal treasures of the sea to customers, including fresh truffle, Wagyu beef from Japan, golden eye snapper, and buri, a Japanese wild yellowtail. $35 per person for lunch; $100 per person for dinner. 7952 E. Coast Highway, Newport Beach, 949-715-7373, bluefincrystalcove.com

6. OoToro
Just down the street from John Wayne Airport, this Japanese restaurant specializes in the omakase and offers several different price levels for the experience. Expect a toro-fest with pieces of striped cheek toro, belly toro and seared toro that simply melt in your mouth. Toro tartare is elegantly partnered with generous pieces of uni, and avocado, surrounded by truffle oil and topped with black truffle shavings. Other unforgettable elements include braised abalone, langoustine-stuffed prawn, smoky grilled king crab leg, and Japanese sea snail and baby shitakes, elegantly served in a flaming dish with a rich flavorful broth.Topping off the already exquisite culinary compilation are slices of buttery tender kobe beef, complete with certificate of authenticity presented upon request. 2222 Michelson Dr. #246
Irvine, 949-222-0688, ootorosushi.com

Sit at the sushi bar. Omakase isn’t the same without the direct interaction of your chef.

Inform your chef of preferences and food allergies, but other than that, trust your itamae.

Expect six to eight courses—typically a mixture of raw fish and cooked dishes, served for an hour or longer, or until you say stop.

Don’t ask for soy sauce or extra condiments—your sushi chef already will have expertly seasoned the fish, or will instruct you on which fish requires soy sauce.

This article originally appeared in the March 2013 issue of Orange Coast magazine.