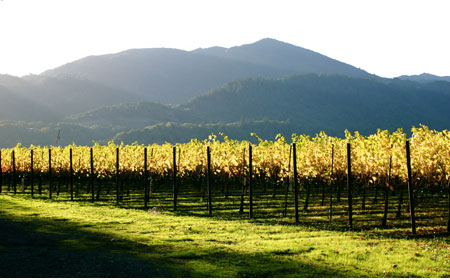 I get home last night and there’s a $135 bottle of Robert Mondavi Cabernet on the counter. My first thought is “To Kalon Vineyard? Wonderful!” My second thought is “Damnit! What the hell am I gonna do with this?”

Here’s my high-class problem. We’re still suffering from the “Sideways” effect. Ever since that movie wine drinkers, especially women, have discovered pinot noir. Chardonnay? C’est passé. Sophisto girls don’t drink that anymore. They want red wine but they don’t want cab or syrah because it’s too inky and heavy. This is a complete pain-in-the-rear for yours truly. When I go wine tasting I tend to buy lots of syrah because it shows well. And my husband, who is also a wine writer, is continually sent samples of cabernet. Not sure why. I think it’s because cabernet is usually the flagship bottle of any winery.

It piles up in my cellar: Justin, Tobin James, Chateau St. Michelle, Zenaida Cellars, Franciscan, the list goes on. But in Southern California where the weather is mostly warm, there isn’t a lot of chance to drink it in summer. In winter it still stockpiles because every time I go to dinner or a party I get requests for pinot noir. And really nice cabernet isn’t a weeknight wine. With a bowl of chili, or pasta topped with sauce from a jar you really just need a zin.

Doesn’t anybody drink cabernet anymore? I remember in the ’90s it got so bad that we would go to Napa and tasters would roll up to the bar and announce that they only wanted to try cabernet. Not the case anymore although they still say, “reds only” then point to their wives and say, “She might taste the whites.”

Jeez. You’re closing yourself off to a whole universe of goodness, ladies. Break out that cabernet and enjoy it. If you’re drinking pinot noir just so you can have six glasses, then maybe you should have a cosmo or two and be done with it. I’m really fed up with the snooty pinot peeps. Think about it. You’re just as rude as those old bags who used to say, “I only drink Champagne.”—Anne Valdespino