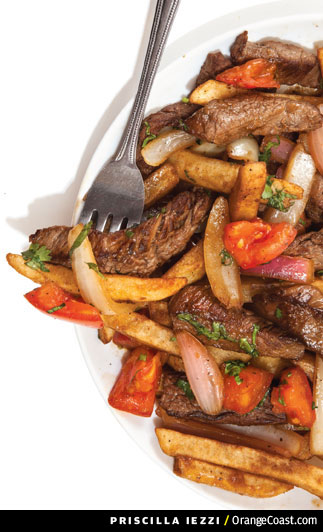 One of Peru’s most beloved dishes, lomo saltado, isn’t completely Peruvian. It’s a Chinese-influenced, wok-sauteed variation on the time-honored pairing of meat and potatoes. The dish comes with a punch of flavors: a dash of soy sauce, a splash of vinegar, tomatoes, red onions, strips of beef, and golden fries, all cooked together and served with a side of steamed rice. Boring meat-and-potatoes, this isn’t.

At Inka Cantina in Fountain Valley, there’s the regular lomo saltado and then there’s the house special, made with rib-eye instead of the usual lean cuts of beef, and fresh hand-cut fries instead of the usual frozen. The rib-eye is tender and the fries retain some of their crispness even while sopping up all that delicious sauce. There are vegetarian saltados as well. Wash them down with a bottle of crisp Cusqueña beer or chicha morada, a refreshing purple corn punch.

If ever there were a hidden gem worth finding, Delicias Peruanas is it. Dad works the kitchen, Mom’s behind the counter, and Son waits tables at this tiny eatery. The pride here is evident in every dish. The family’s lomo saltado is as homey and flavorful as it gets, with lean strips of beef that remain juicy, fresh tomatoes and red onions that are cooked just enough, and a pyramid of rice just waiting to be enjoyed with the savory and tangy stir-fry gravy.

Those with a salt craving will love the saltados at Chicama Peruvian Restaurant, where they can be made with your choice of beef, chicken, seafood, fish, or shrimp. Tomatoes aren’t as prominent here, but there’s plenty of kick from the soy and vinegar. Don’t miss the scratch-made desserts, especially the alfajores, a classic treat of gooey dulce de leche sandwiched between buttery shortbread cookies.